Touring bike or mountain bike? None offers all I wanted to have, so when it comes to equipment, I would have to replace the same parts (wheels, racks, pedals), they cost on average the same so all comes down to personal preference. I chose mountain bike because of its more agressive geometry and this particular frame won me with its design. Technically the bike is nothing fancy. I'll explain my reasoning dividing the equipment into several categories:

- Drive consists of parts mostly from Altus, Acera and Alivio groups so rather a low-end. From my experience, it doesn't matter how sophisticated the group is, raw mileage and weather conditions will break it down in one year or less. After the winter (constant mixture of salt, water and sand) I replace chainrings, and chains regardless of their actual condition, so the focus is shifted to the lower price. Weight difference is not important as the bike carries over 140 kg already. In this case, drive remained as in the retail version, I only bought additional 3 chains to change them once a week and therefore slow down chainrings wear.

- Wheels are the most important and should be as reliable as possible. Why? Because they can break from a single impact, unlike other parts, which are usually better protected. I can carry additional tubes and some spokes but not the rim or the hub. so broken wheel can cause biggest delays as it is time consuming to replace it. Ready-to-ride wheels available in some bike stores can last for couple of days, weeks if I'm lucky, but they are not an answer, considering the load. I changed retail wheels to DT Swiss 545d rims with CN Spoke 2.0 and Novatec hubs (D032SB on the back and D041SB on the front).

- When it comes to tire selection I don't care about lower weight or rolling friction as much as width and puncture protection. 2,1 inch allow me to carry all the load on the gravel and forest tracks while they are not too wide for paved roads. Two years ago I tried Schwalbe Marathon Plus tires and my problems with flats almost completely dissapered. Right now, when writing this, I look at my shelf where there are still 8 spare tubes for 26  inch wheels and at this rate, they will sit there for years. The general idea is like this:

a) New tire on the back wheel.

b) After 6-10 months it is moved to the front wheel (lower load and friction there). New tire on the back.

c) When I catch first flat on the front it is time to repeat b) and c).

- Maintaining position (saddle, handlebars, pedals). The longer the distance, the harder and smaller saddle I prefer. Wide saddles increase friction in the long run as I try to keep my knees close to the frame, sometimes almost rubbing it. Handlebars should provide different body positions and allow wrists relaxation. That's why I always prefer aerobars over bent road bike handlebars. Also clip-in pedals are a must have for me. They allow to use more muscle goups and, when needed, exclude certain groups from participating. On the downside, they need customized shoes, which in general, are not mentioned for walking, but still the list of pros is much longer. I've replaced retail pedals for Shimano PD-M520 and added Ergotec Tribar Easyliner handlebar. Saddle remains as in the retail version, it is only shifted all the way to the front and tilted a bit so its nose points downwards. The general idea is like this:

a) I want to spare energy effectively so I use clip in pedals.

b) Clip in pedals increase pressure on the crotch area therefore I want to move more weight to the front (tilted saddle).

d) The result is comfortable position with evenly distributed load, but elongated lower spine therefore I frequently change the position (even 10 seconds every couple of minutes is enough) and don't forget about lower back muscles when I stop.

- Racks and additional items. Rear rack allows to mount panniers lower than the top surface and is designed for 40 kg load (not 25 kg like most standard racks). Front panniers are mounted to the low riders with additional front rack for utensils needed during the ride. That third small rack allows me to limit the stops to the bare minimum if I want to. Wide fenders because of the wide tires and for better protection. Finally two bottles for water and a 4 liter water bag hidden in a pannier. This water bag can be hung upside down and serve as a portable shower.

Tried them once and I'm not going to change a winning horse. These are the cheapest of Ortlieb's bags ( Back City Roller 20l ) but the quality, durability and flexible mounting system makes them unbeatable in quality / price ratio. Plus each repair was really fast and cost free, so far.

Notice that my front bags are actually the same as in the back. The ones dedicated to front are smaller and more expensive, so I chose arrangement with four equal panniers since I already bought second pair when first one was being repaired.

When compared to the computer, two small bags on the front are like CACHE memory. I can access them any time, without stopping or even slowing down. They carry utensils like map, phone, camera, chewing gum, sun lotion or whatever may be needed and is not worth making additional stop. Then there is RAM memory, two 20l panniers on the front which can be detached independently without involving anything else. An finally HDD (71 litres + tent) on the back. I need to stop and dismantle some entangled structure just to open one of them, but they carry things which will be needed after the full stop and not every day. 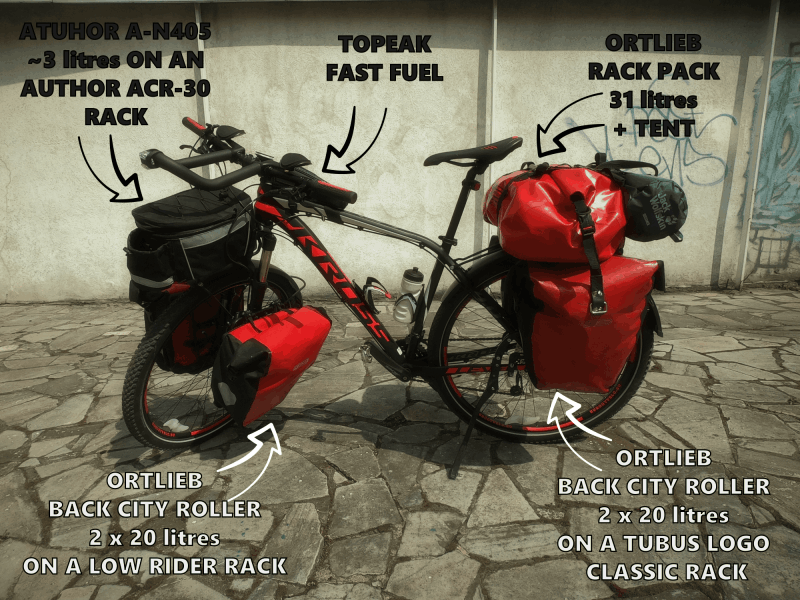 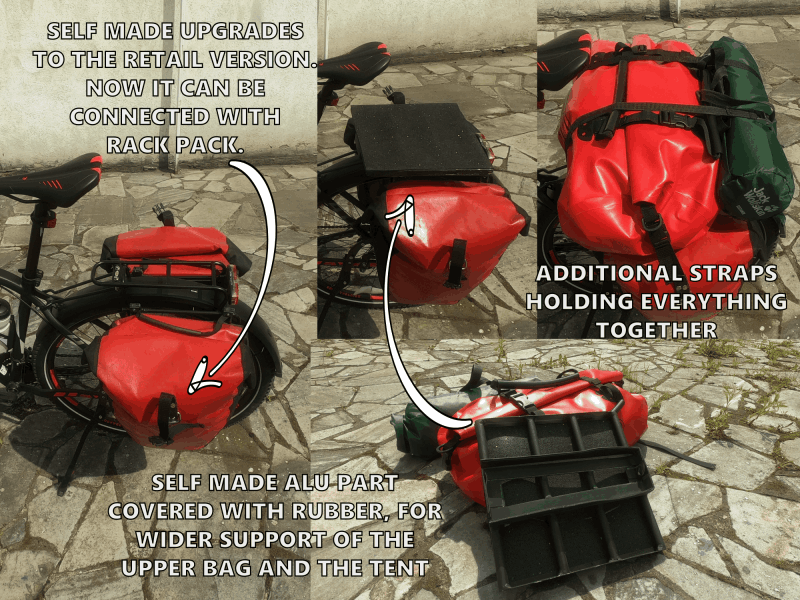 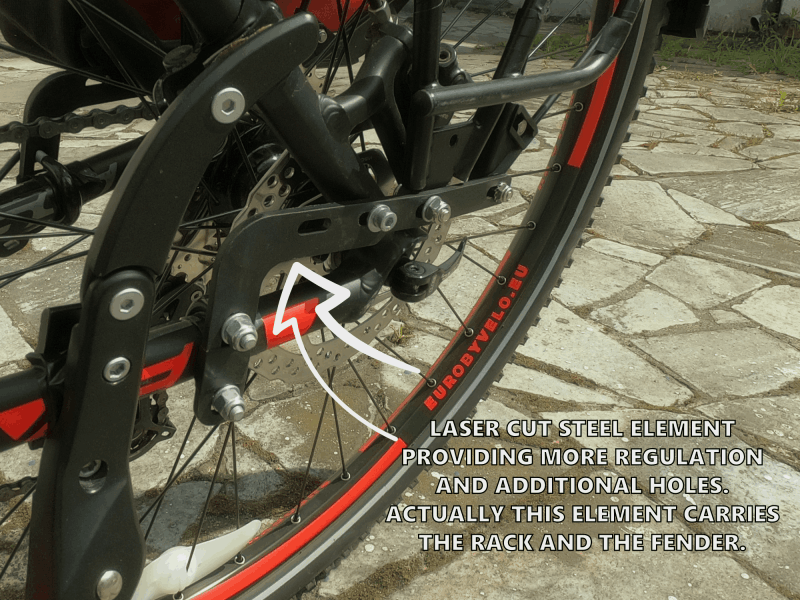 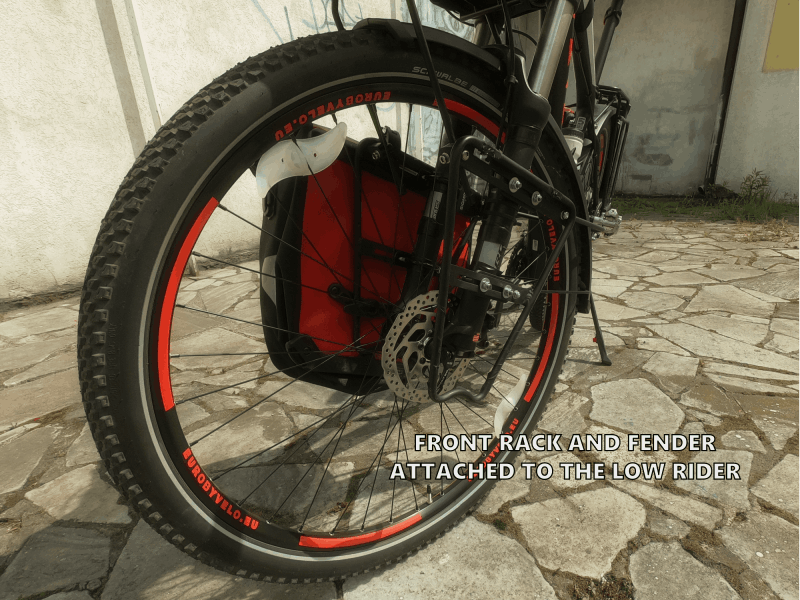 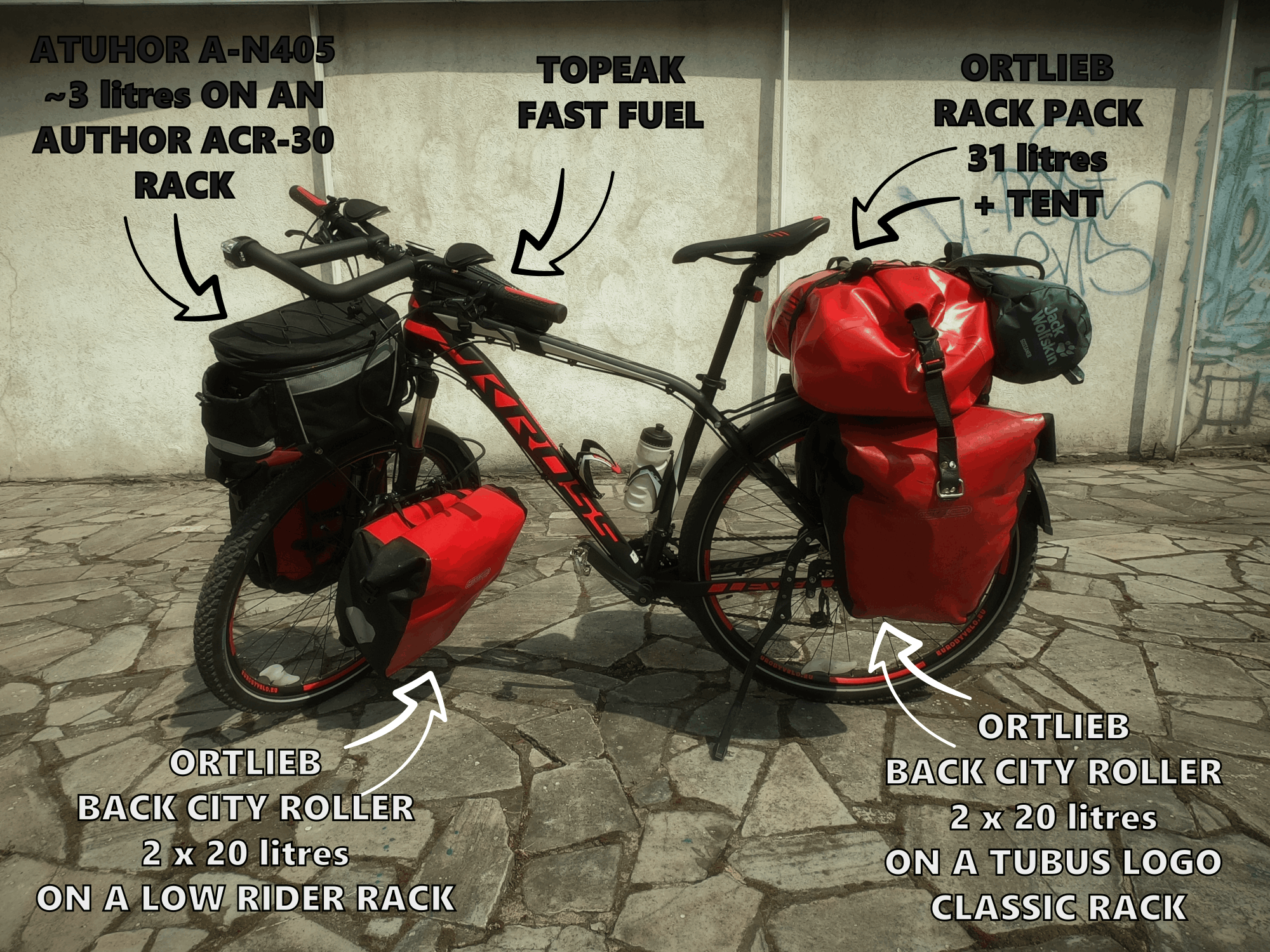 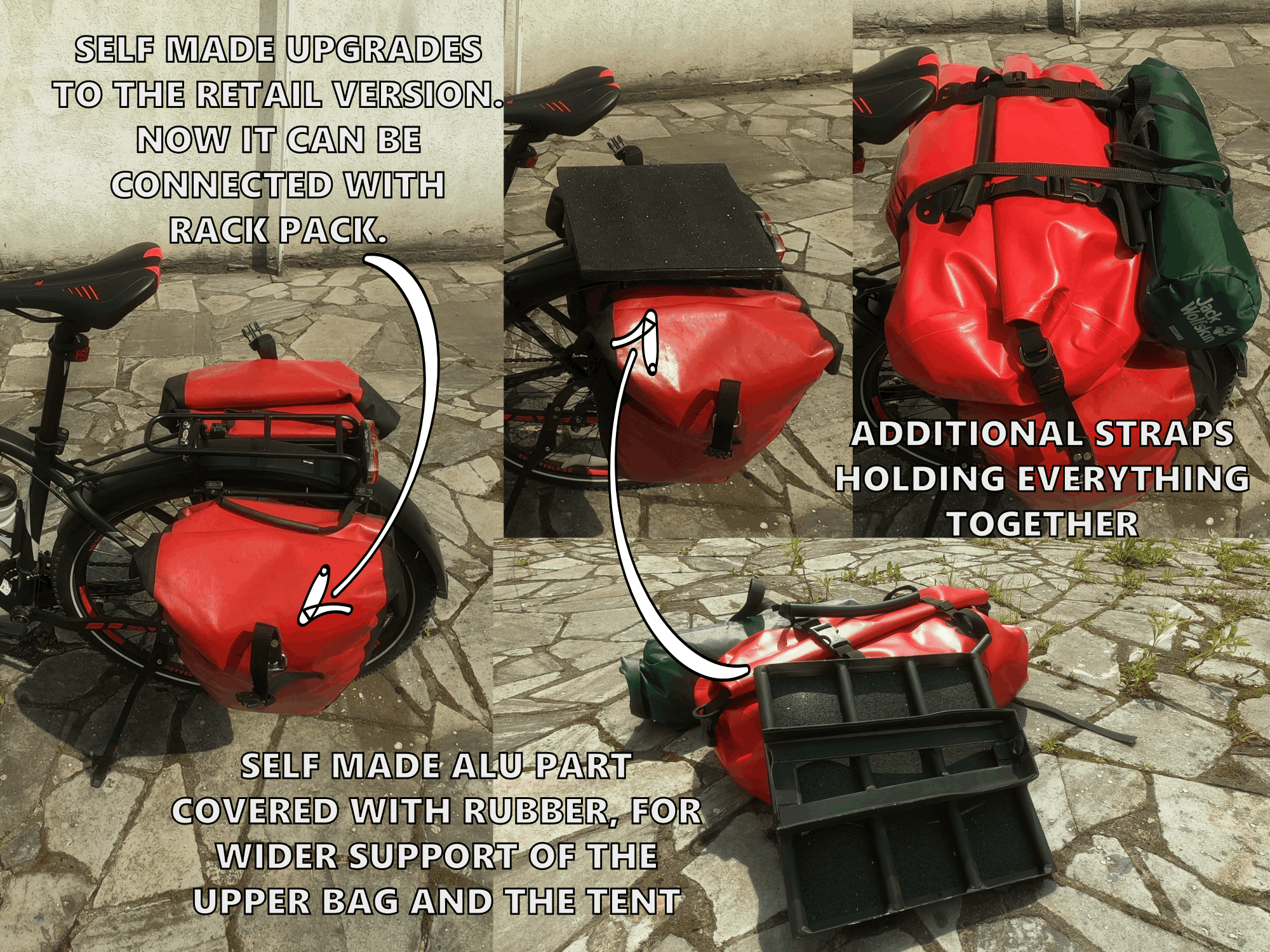 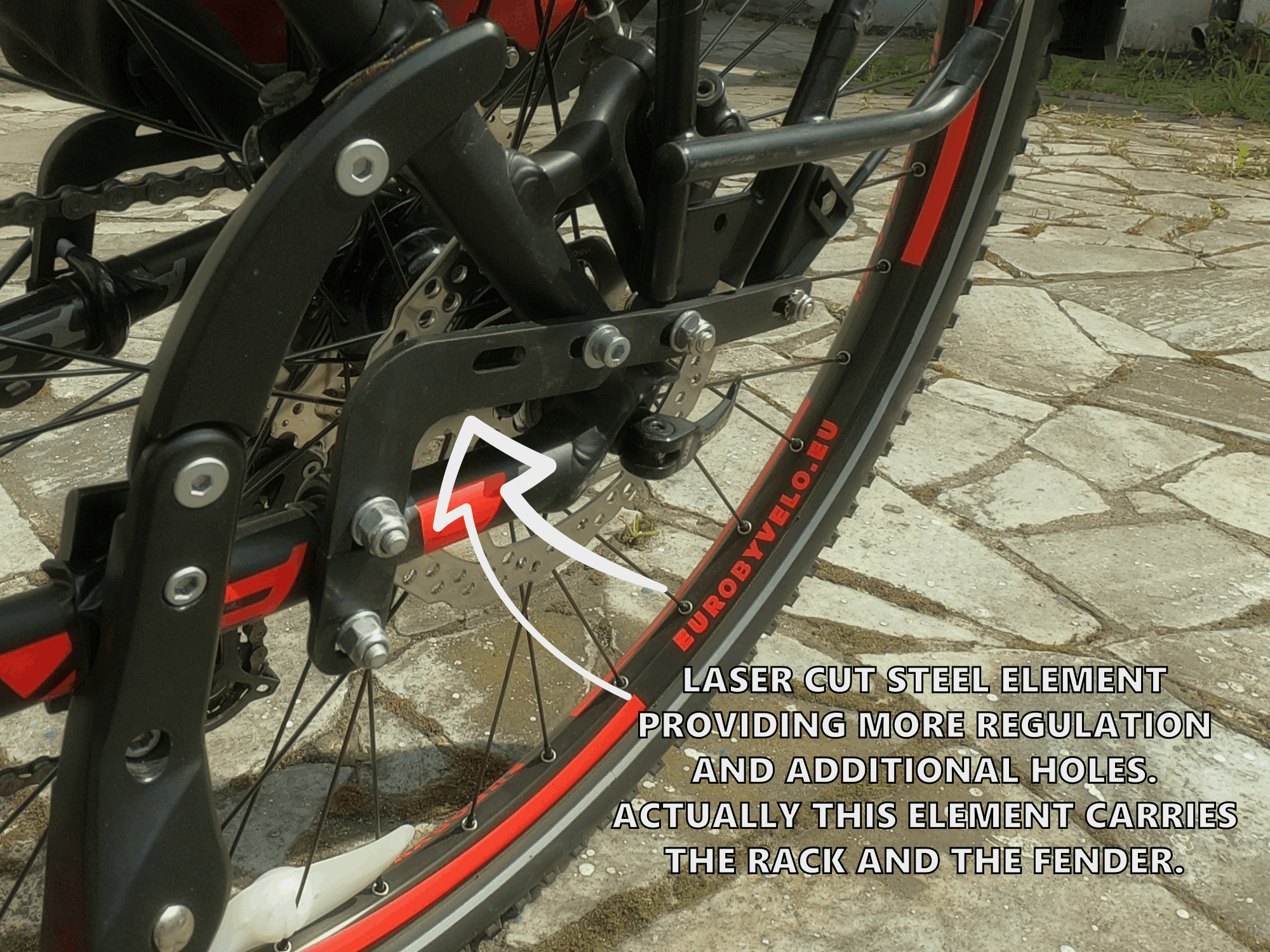 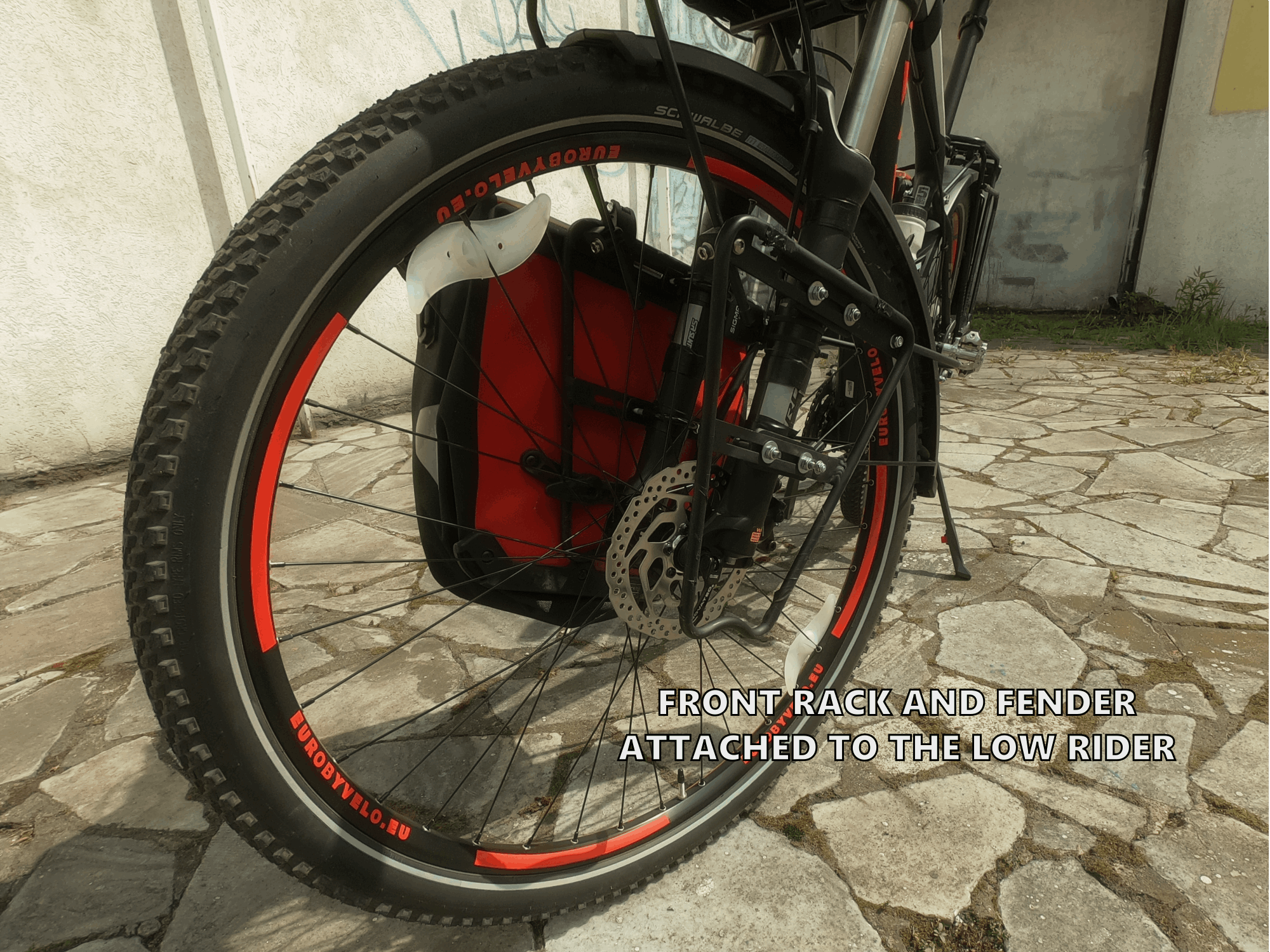 As for the sleep I hesitated between hammock and tent. Hammock is smaller and has the exotic factor, as something completely different, but I'm glad I've tried it 9 months before departure.  Learning to sleep well in a hammock turned out to be the hardest and most time consuming task. I'm not sure whether my sleeping habits were so incorrect or it is really hard to master this ability. There was no comparison to sleeping on the ground in terms of neutral spine position and heat comfort. I've tried putting insulating layers on the bottom, stiff or soft, even inflated but with no luck. Guess hammock will remain as a tropical indulgence dream but tent stays my reliable road companion.

For food preparation one gas burner is enough. Even when I run out of gas or something breaks there is plenty of food that does not have to be cooked and I will not stay in remote environment afterall.

I should mention my preferences about nutrition at this moment. What suits me well is to get up an sunrise, drink water or tea and start riding. Usually I'm on the road between 5 and 6 a.m. and first couple of hours I ride without food. To be honest, it is the best part of the day in terms of energy levels and mind clarity. Glicogen levels are high but body is not wasting energy on digestion so you have more blood and kcals available for the muscles. Insuline levels are low as your last meal was about 8 hours ago, so the body is more eager to burn fat for fuel. Also lower temperature, high humudity makes you full of vigor.

If you knew me before, this chapter would really suprise you. So far I thrived on a "low information diet". No tv, avoiding radio in favor of pure music, turning off my phone when I met with friends, not answering the calls when I was on holidays. There were trips were I didn't even take a camera and have not a single photo to remember.

Still I see the low information diet as the best way to improve the quality of your life in the easiest and fastest way possible. Yet, I carry a little electronic store with me on my dream voyage. But it has a purpose as I'm trying to record and archive as many important details as I can (don't worry, I will publish only a small part).

As far I noticed that after a week I don't remember details, after a month I recall only a vague outline of the event and after a year I can only see my imagined picture which may be completely different from the real one. Hope that weekly updates will keep me

Solar panel and two solid power banks should give me enough energy to maintain the whole week without excessive need of power supply. I plan to stop in civilized place at least once a week to update the website.

For route logging I use an offline GPS logger. I have to download data manually to the computer but it has lower energy consumption and uses very convenient Nokia batteries. As a backup I write down rough desription of the route and distance measured by the bike counter. In case logger will fail I should be able to update data manually.

The lights i use on the bike aren't meant to make the road visible during the night. They only signal my presence to the other road users. I'm not planning on riding much after sunset. One headlight used for camping purposes wraps up the list. In case of emergency, phones have their own flashlights.

With all the cables, chargers and battery replacements, it is quite a dead load to carry but hopefully it will serve its purpose.