web builder
About escaping the winter. 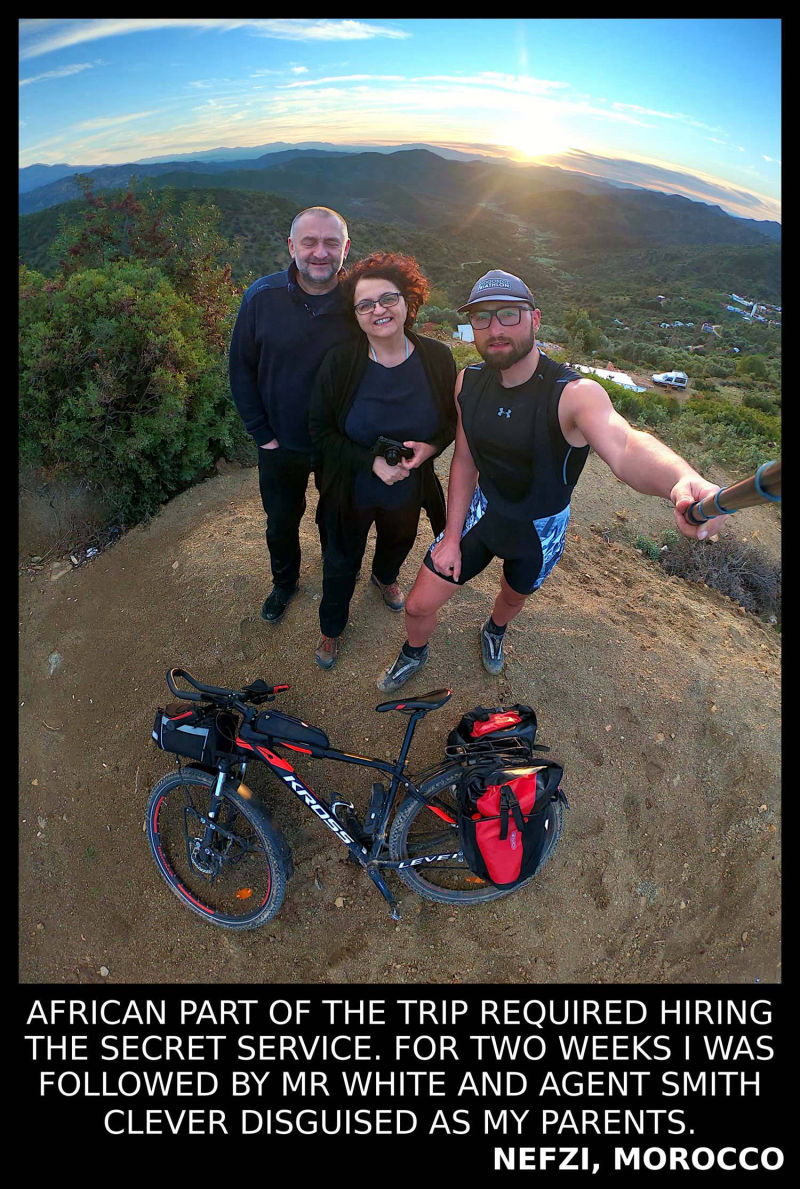 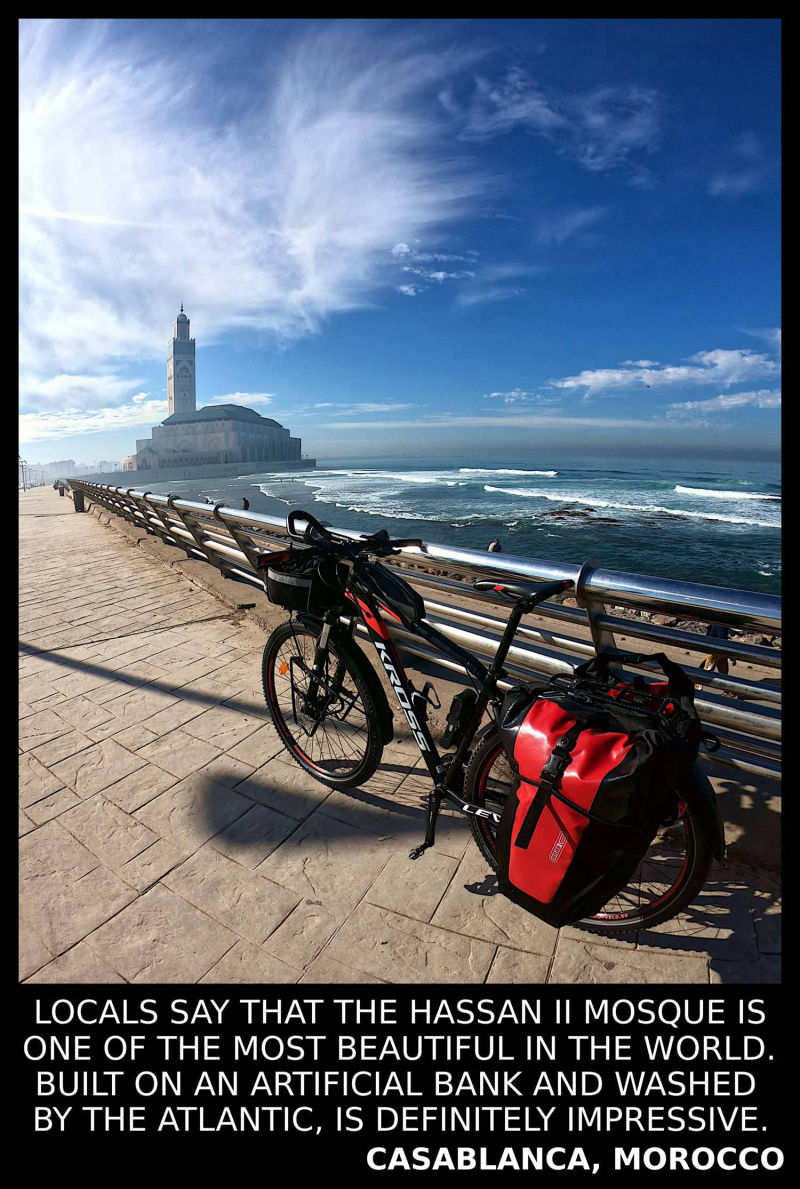 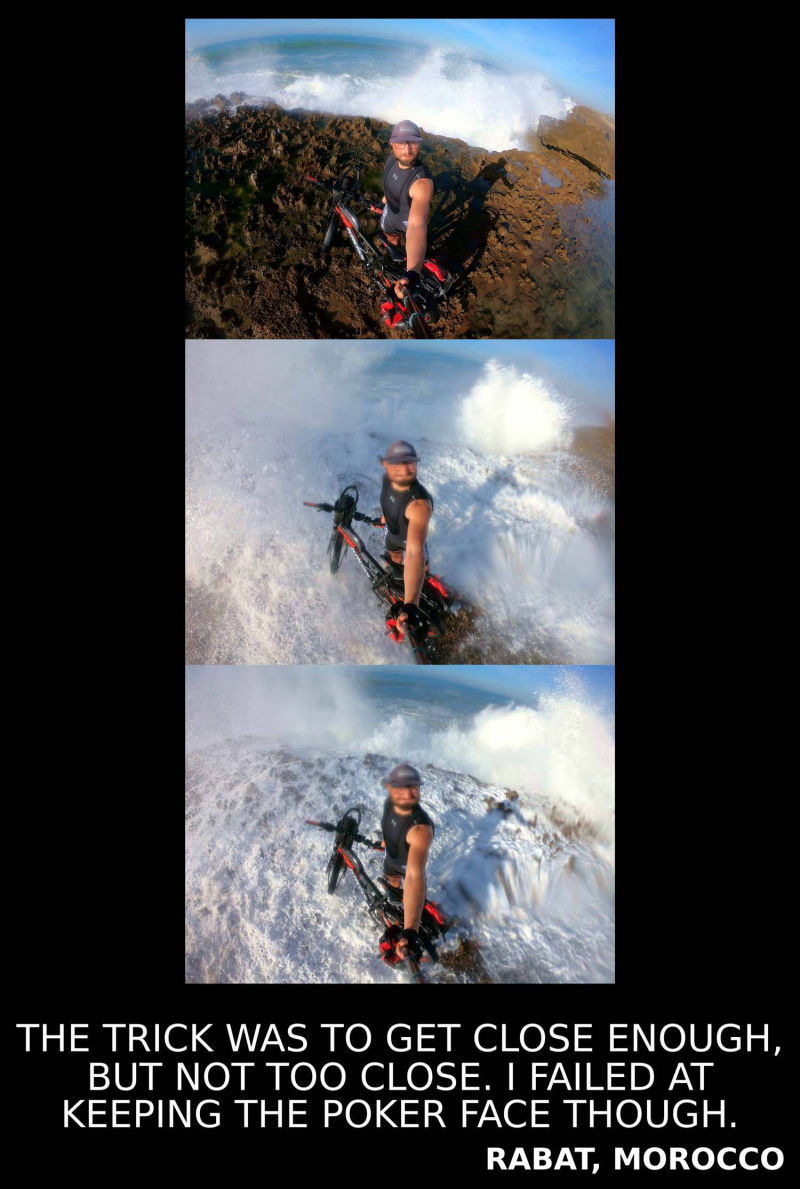 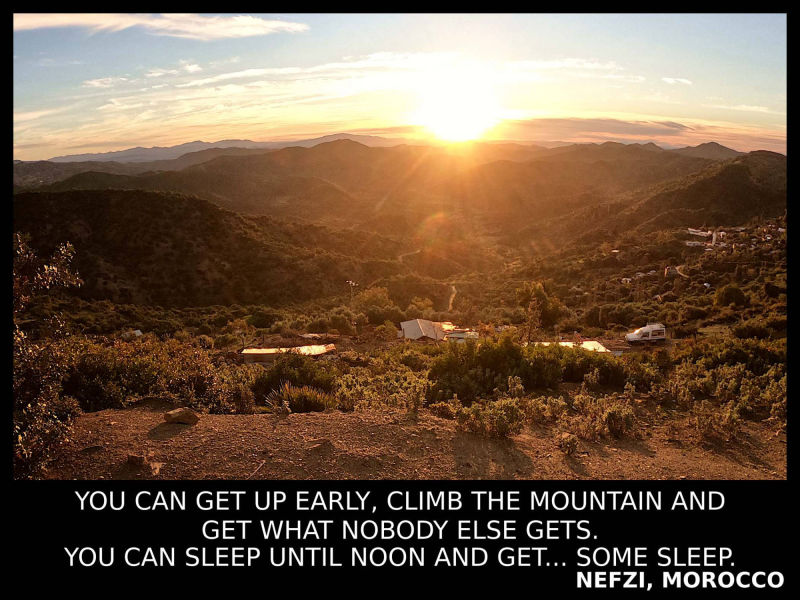 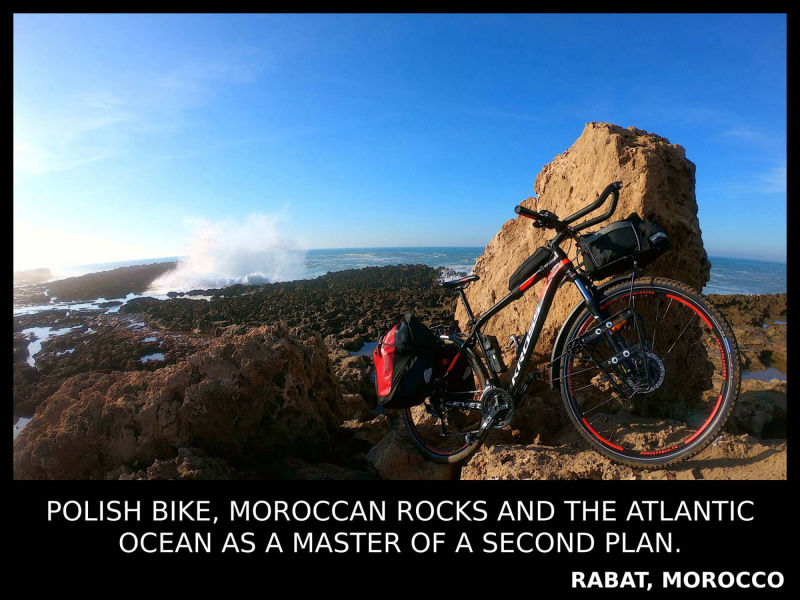 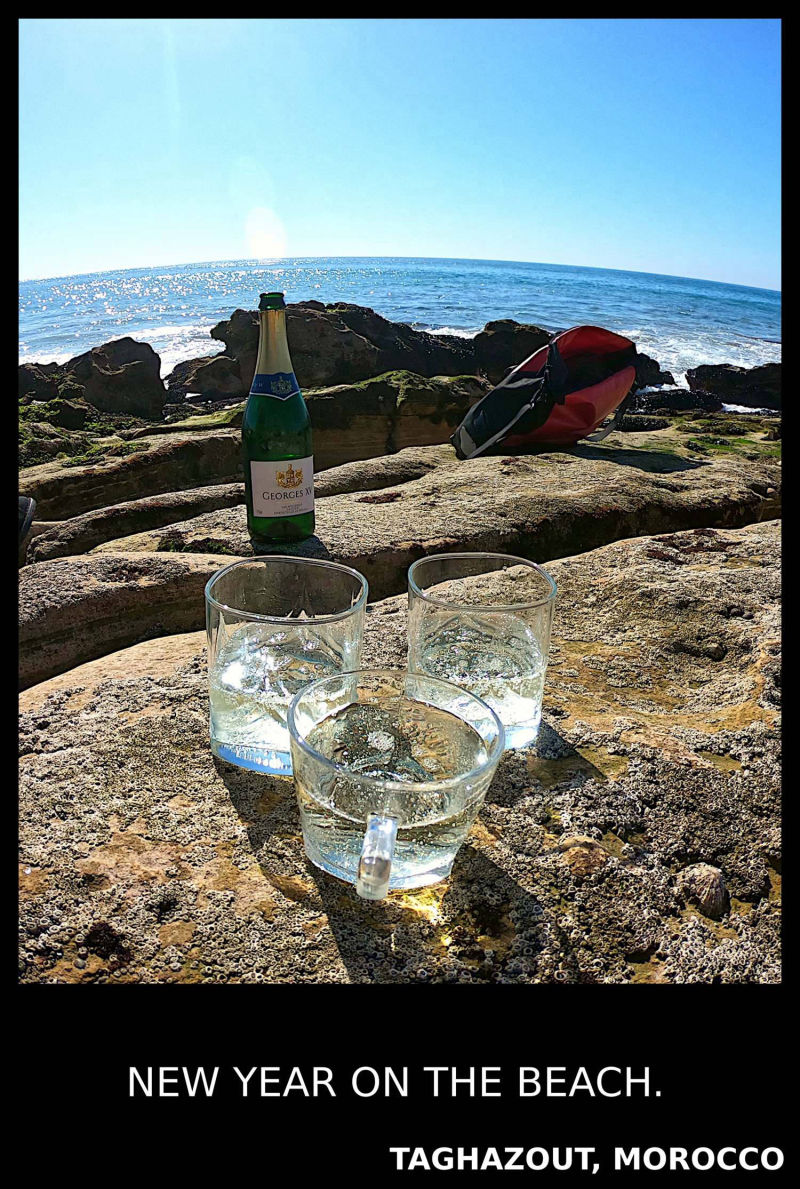 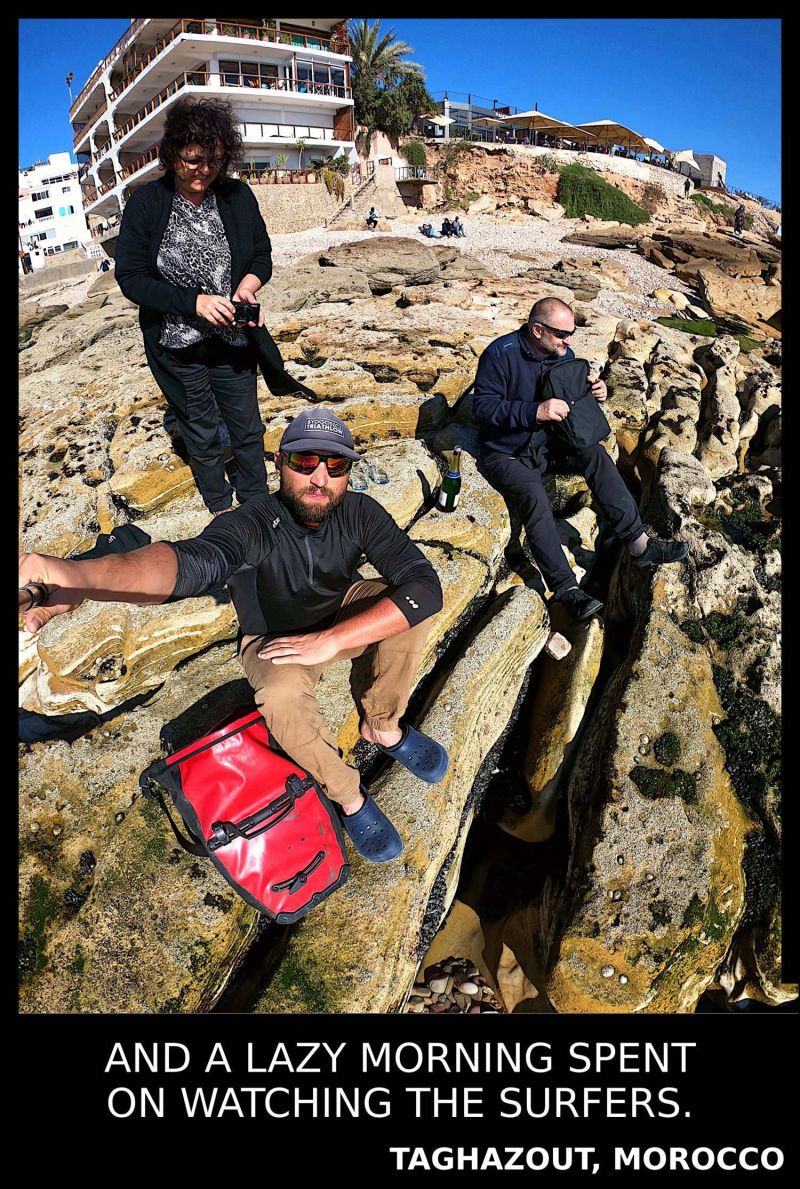 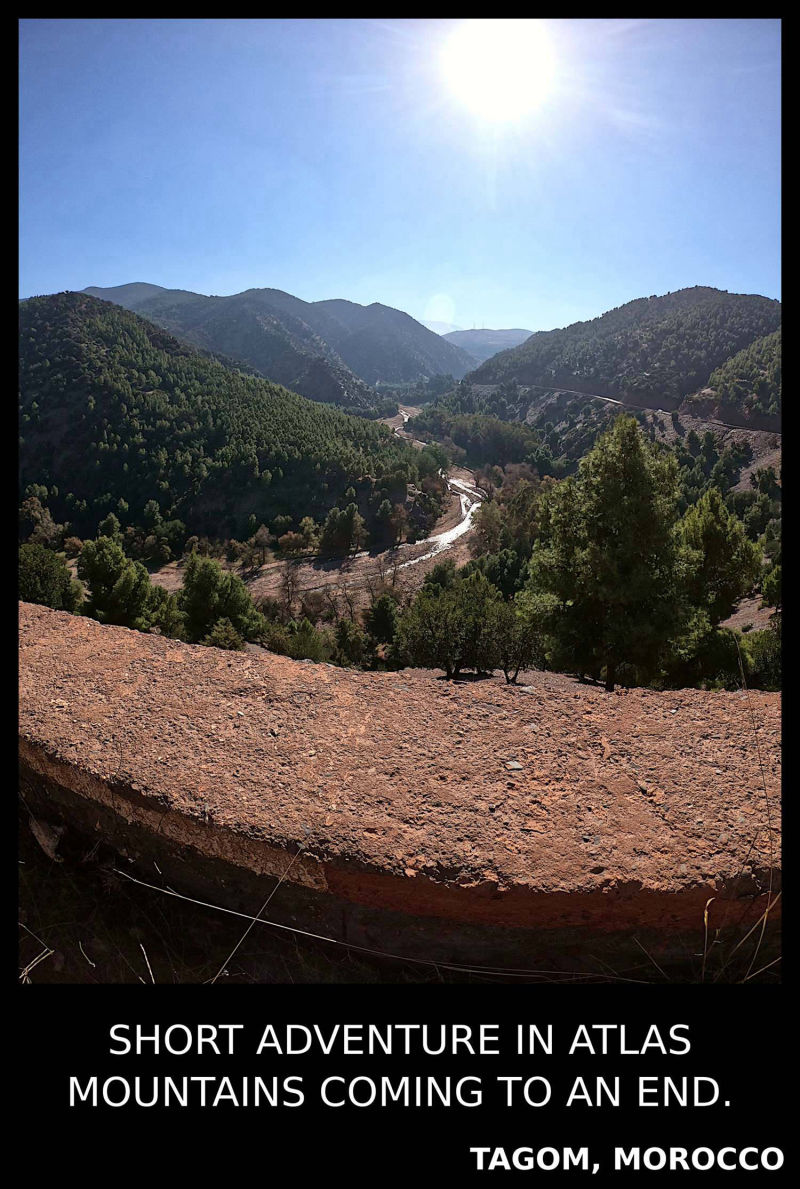 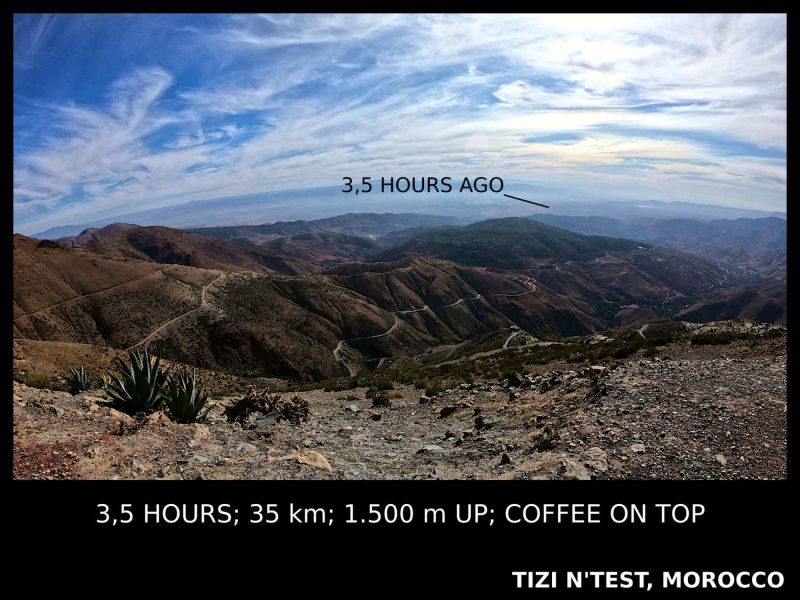 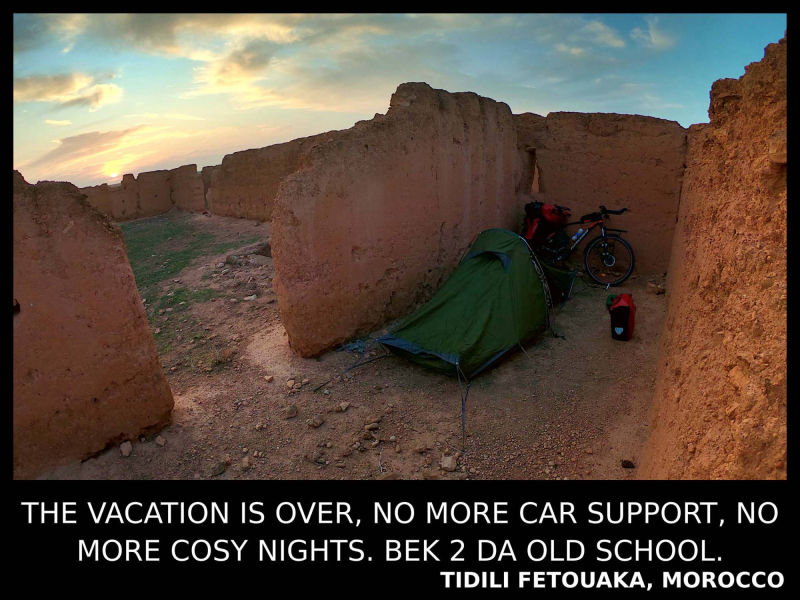 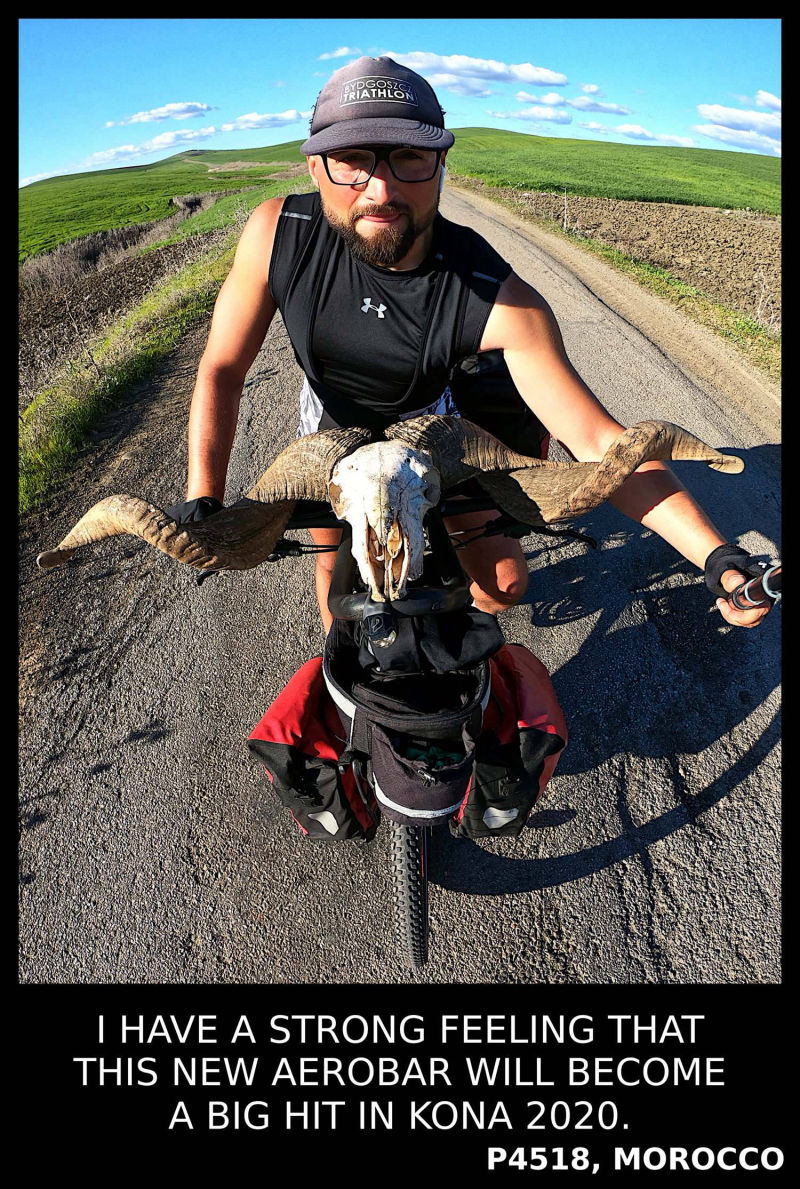 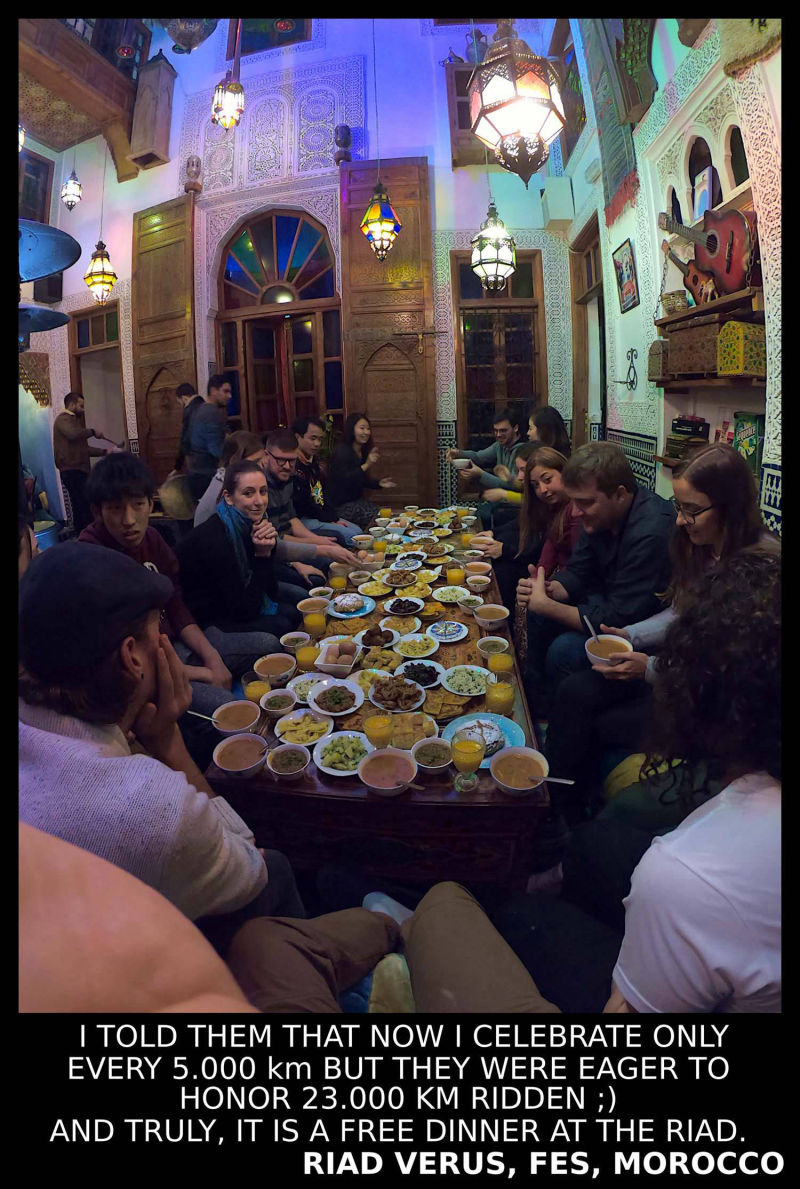 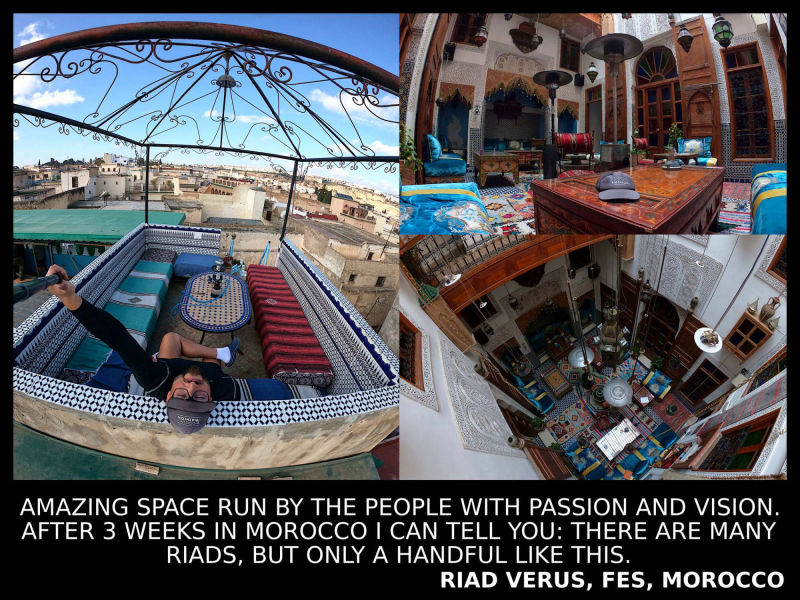 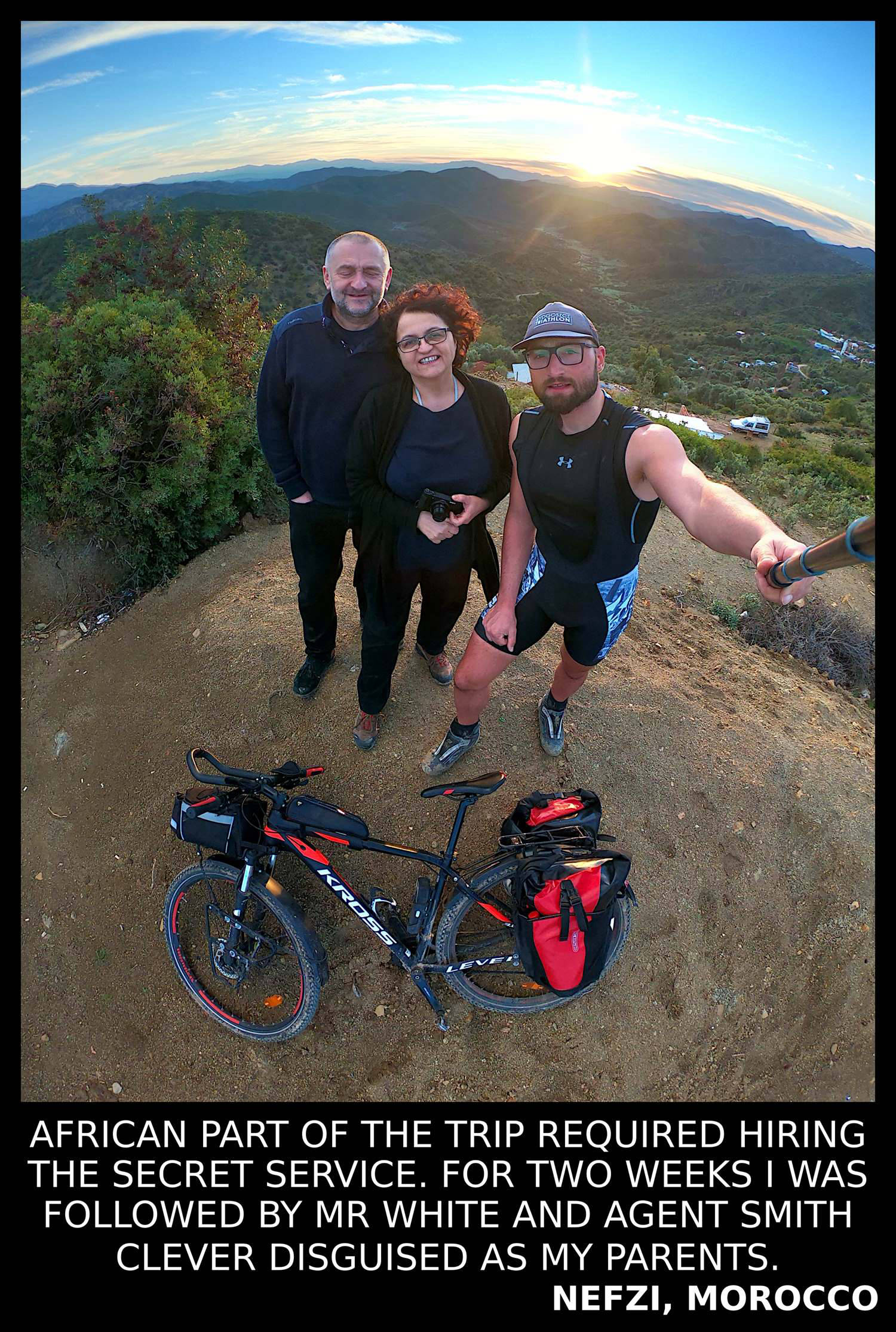 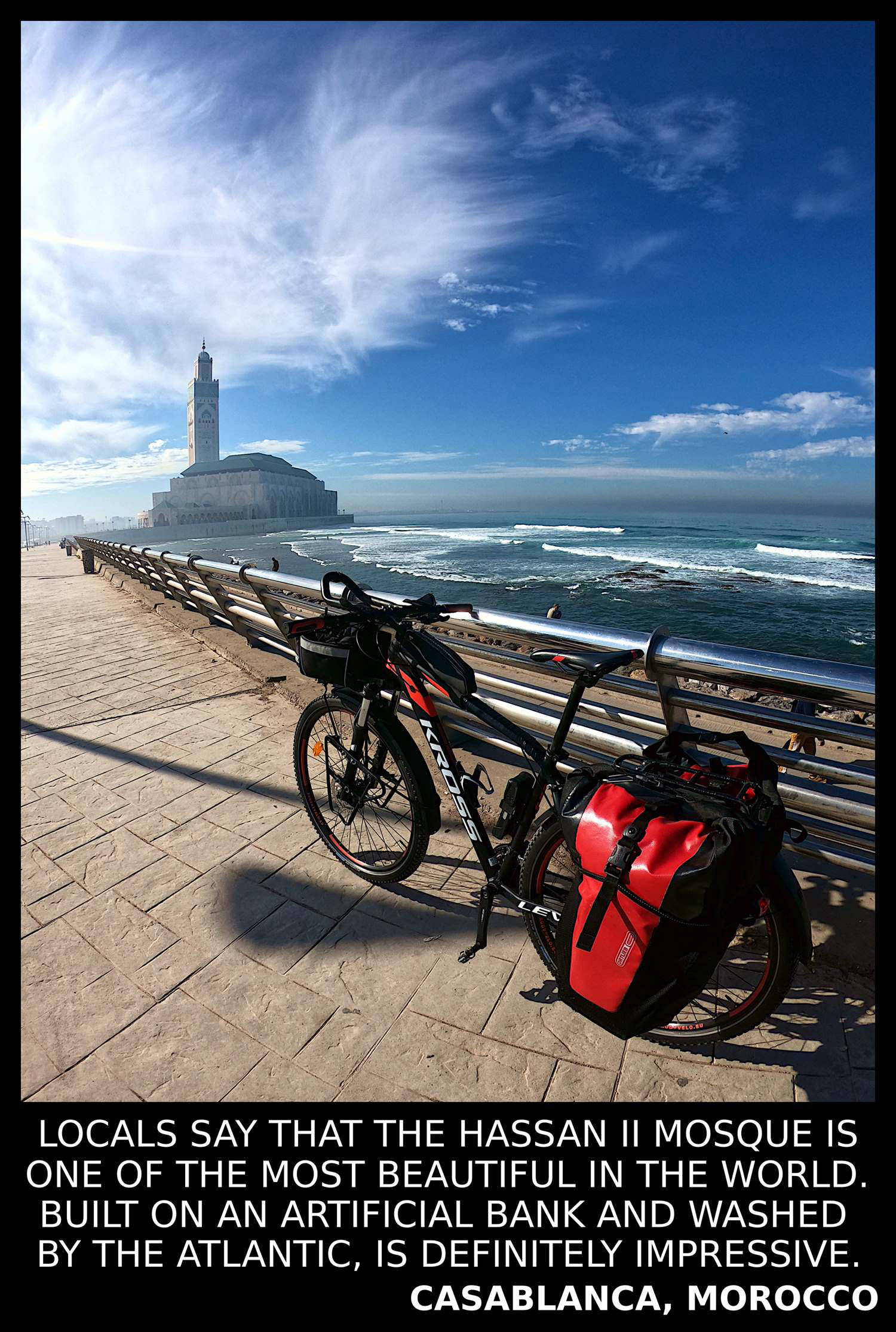 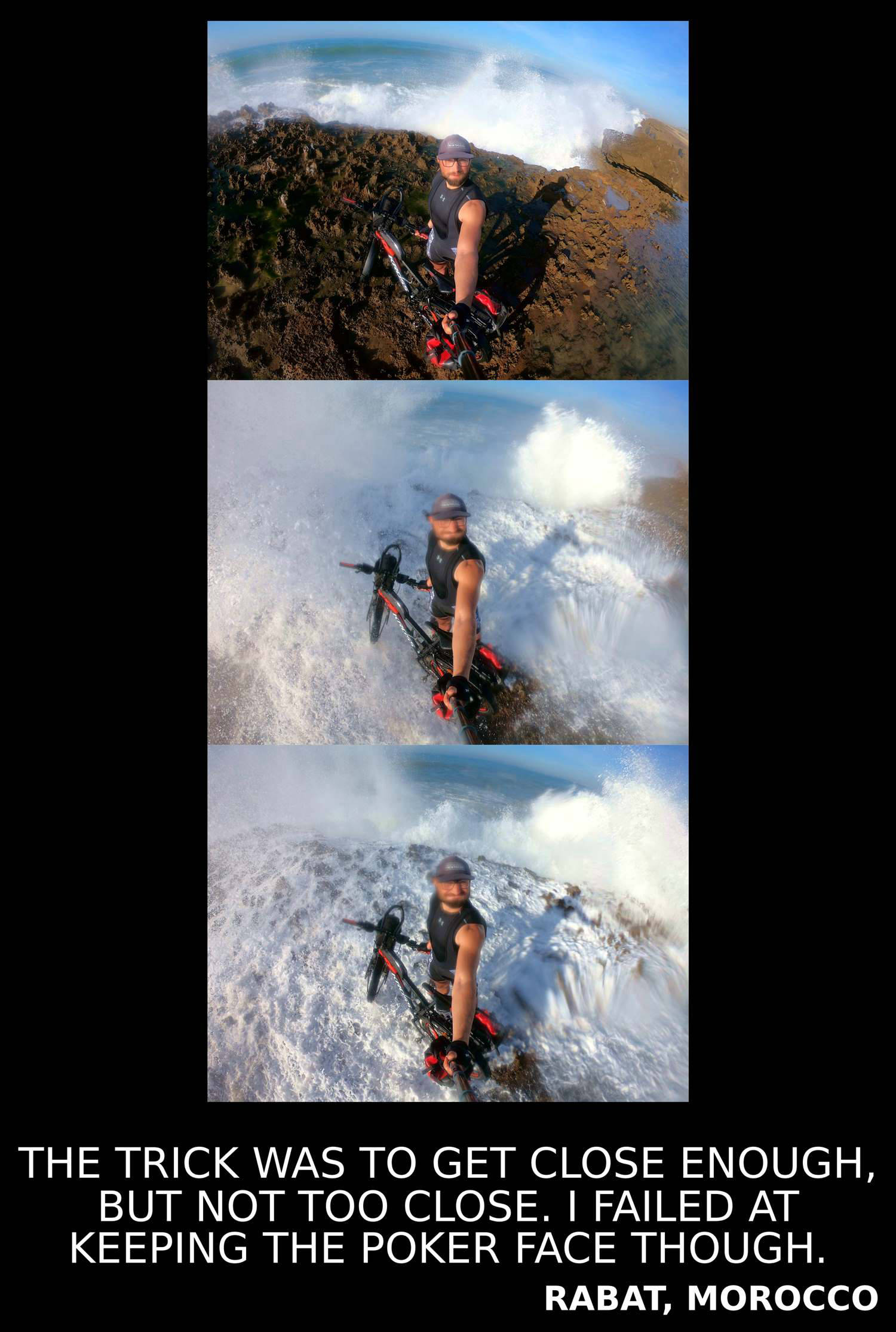 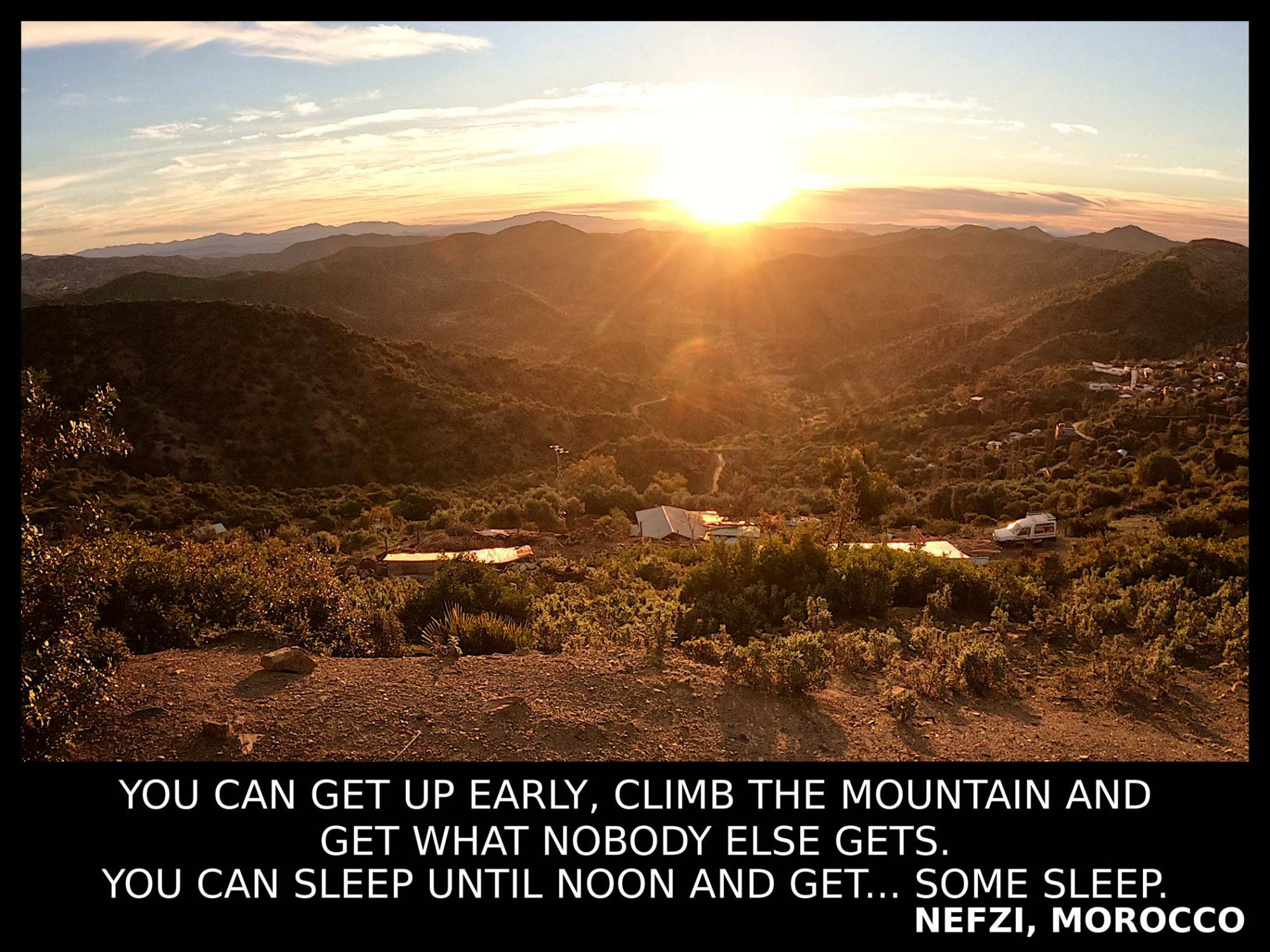 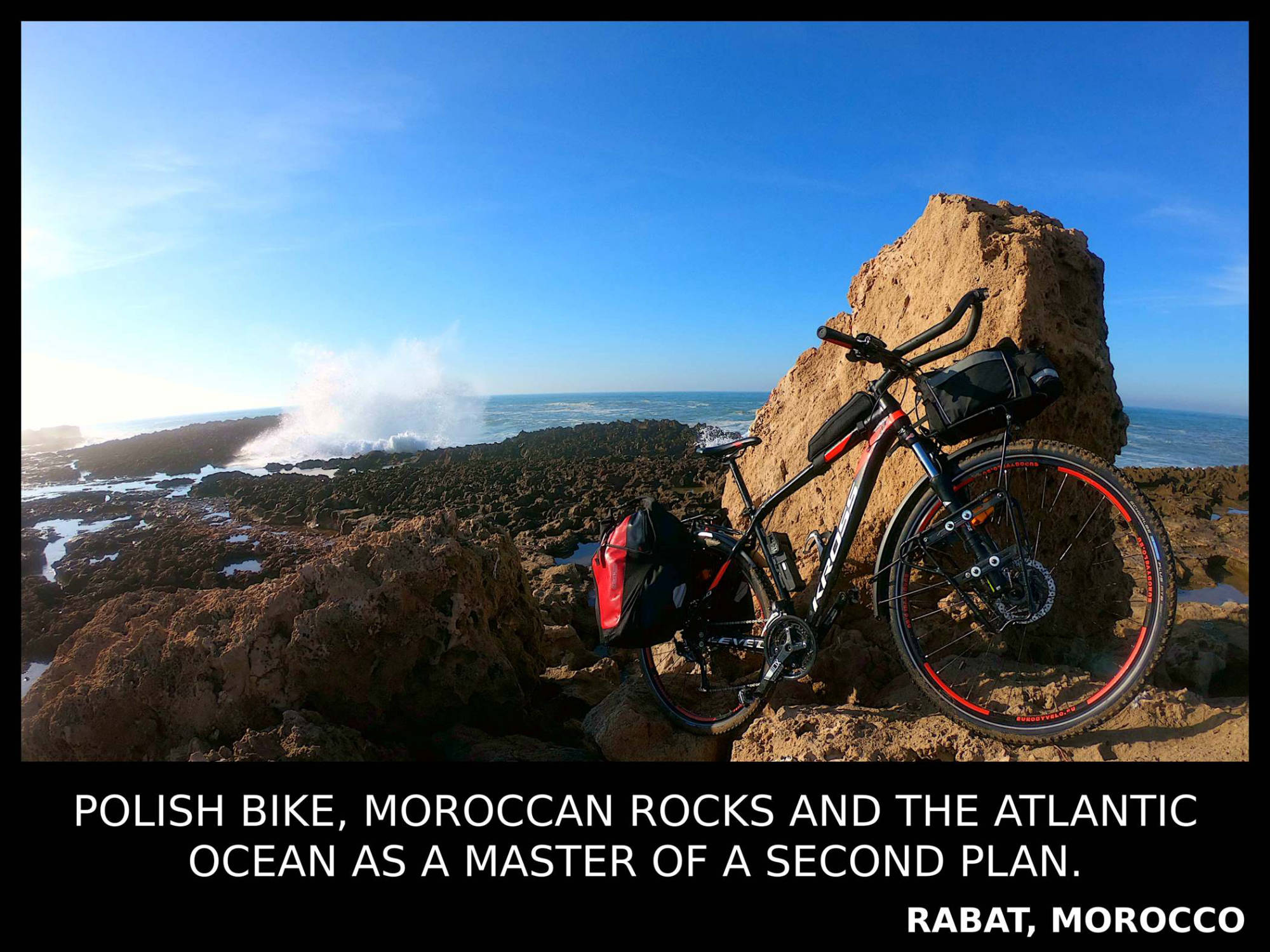 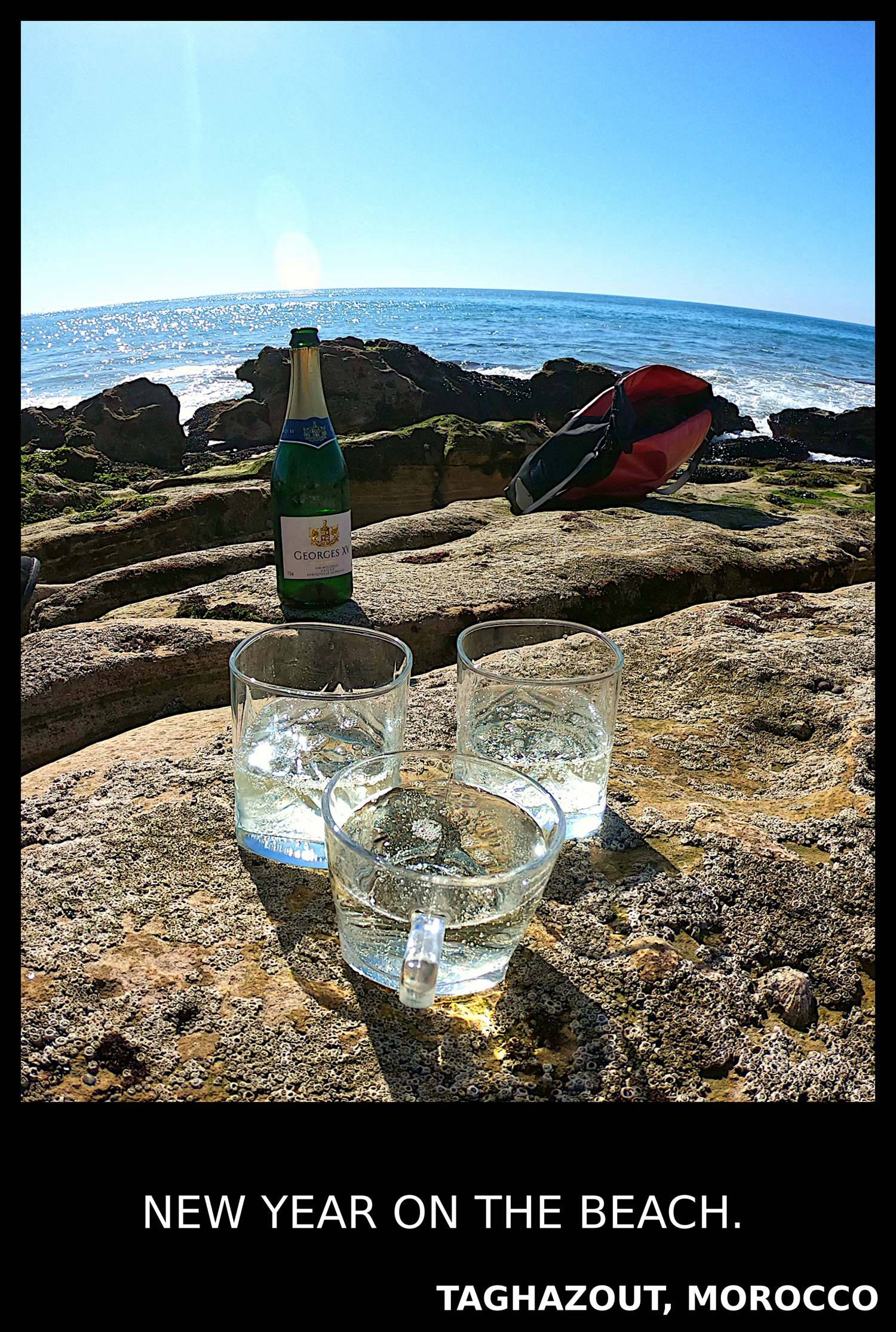 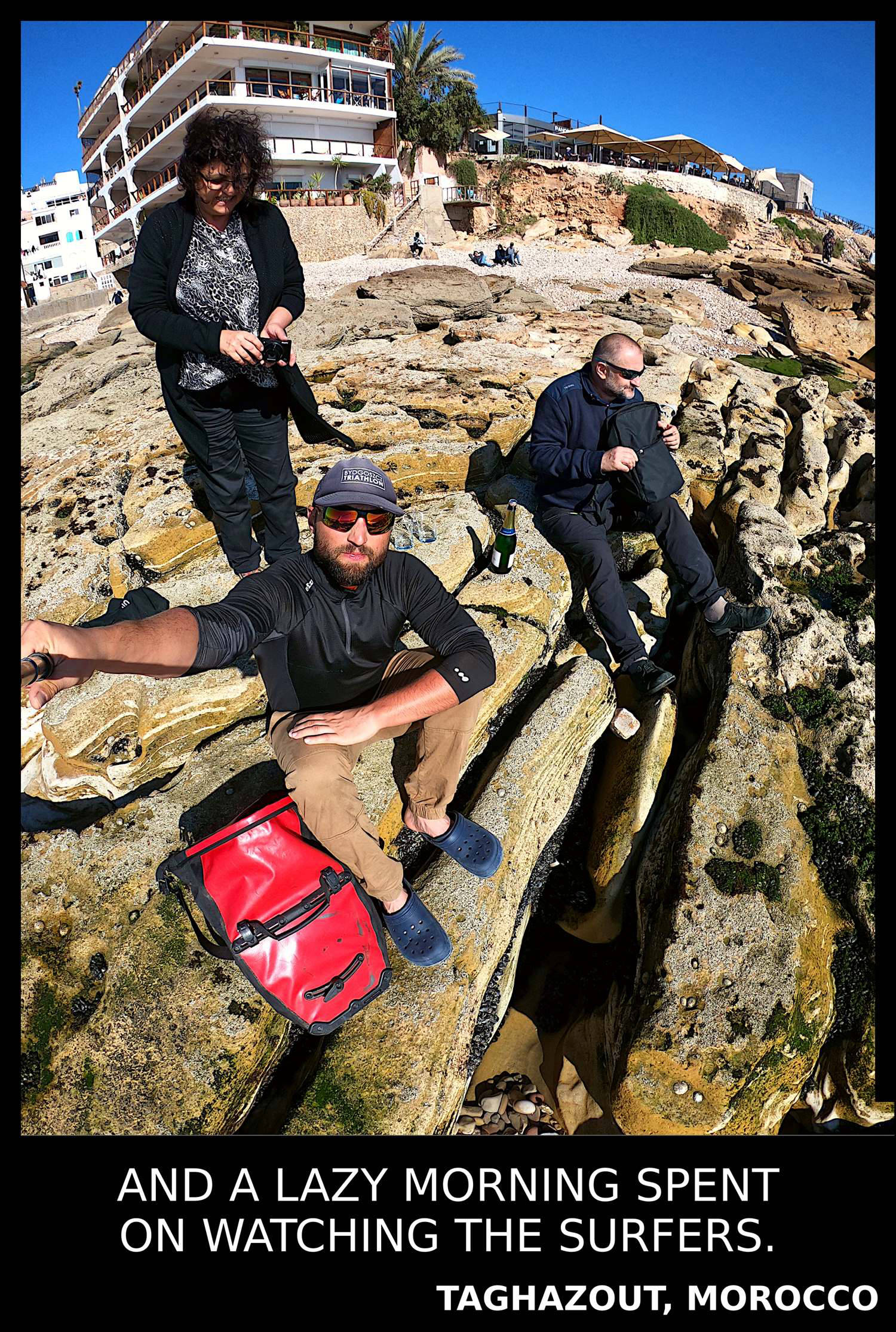 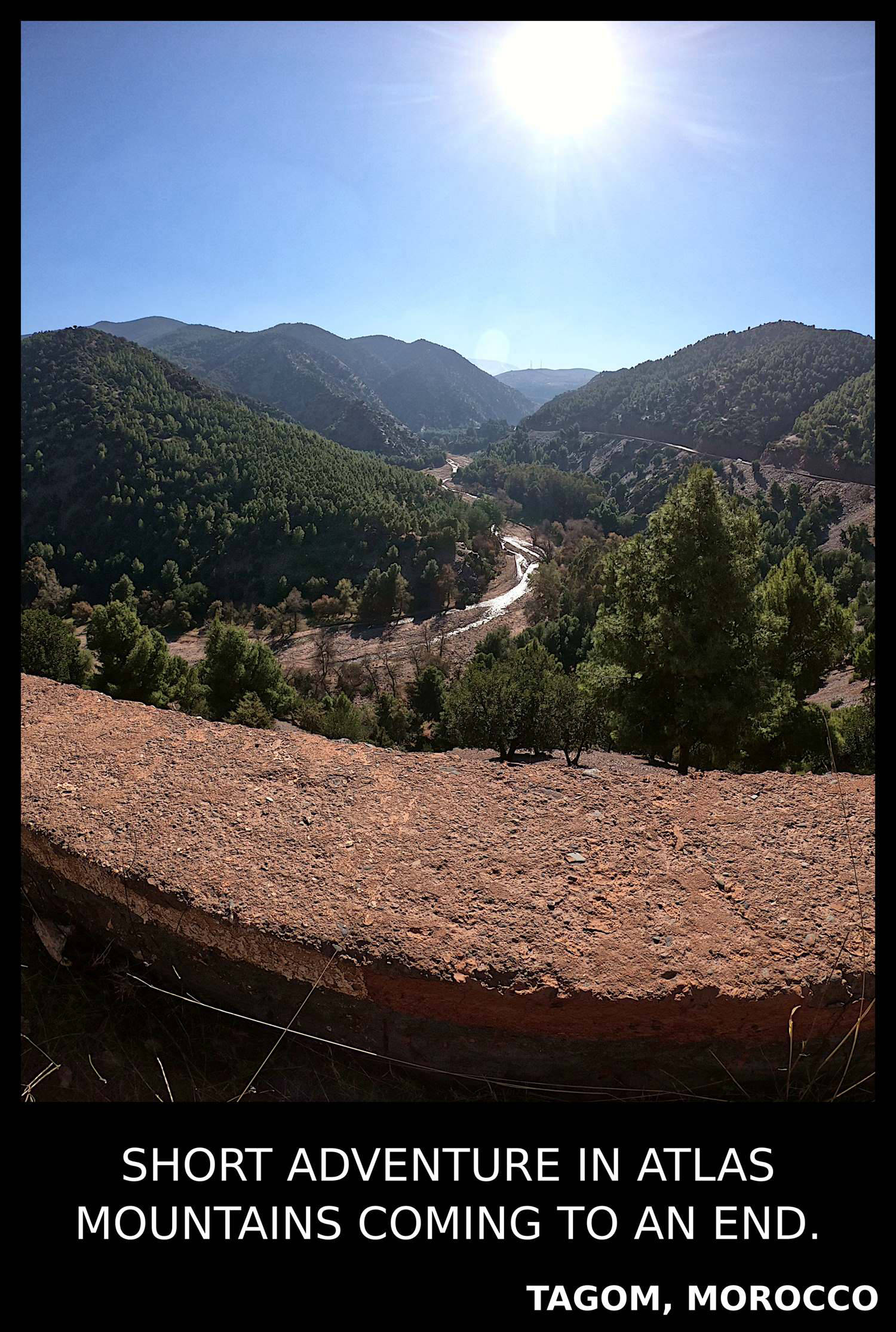 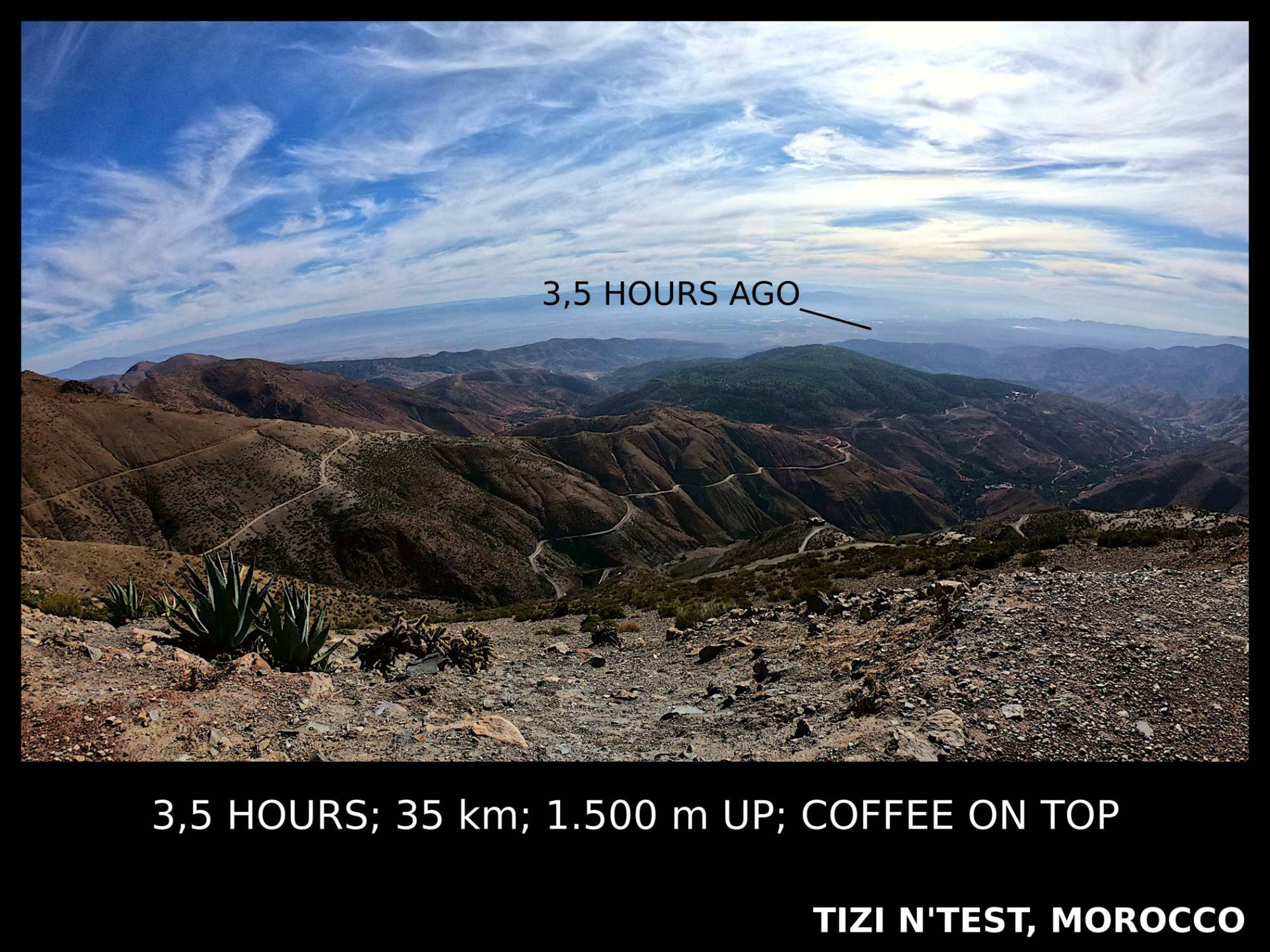 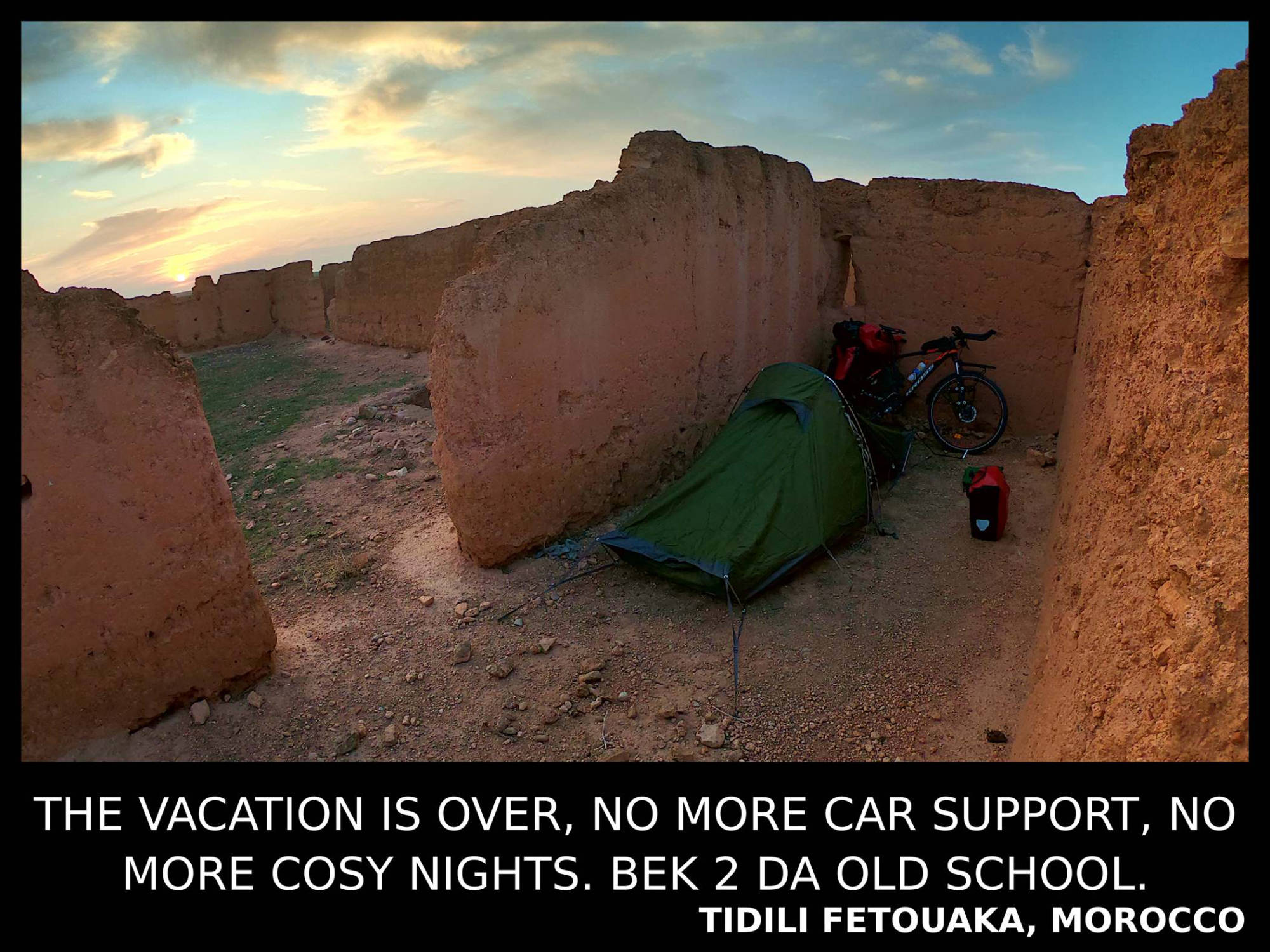 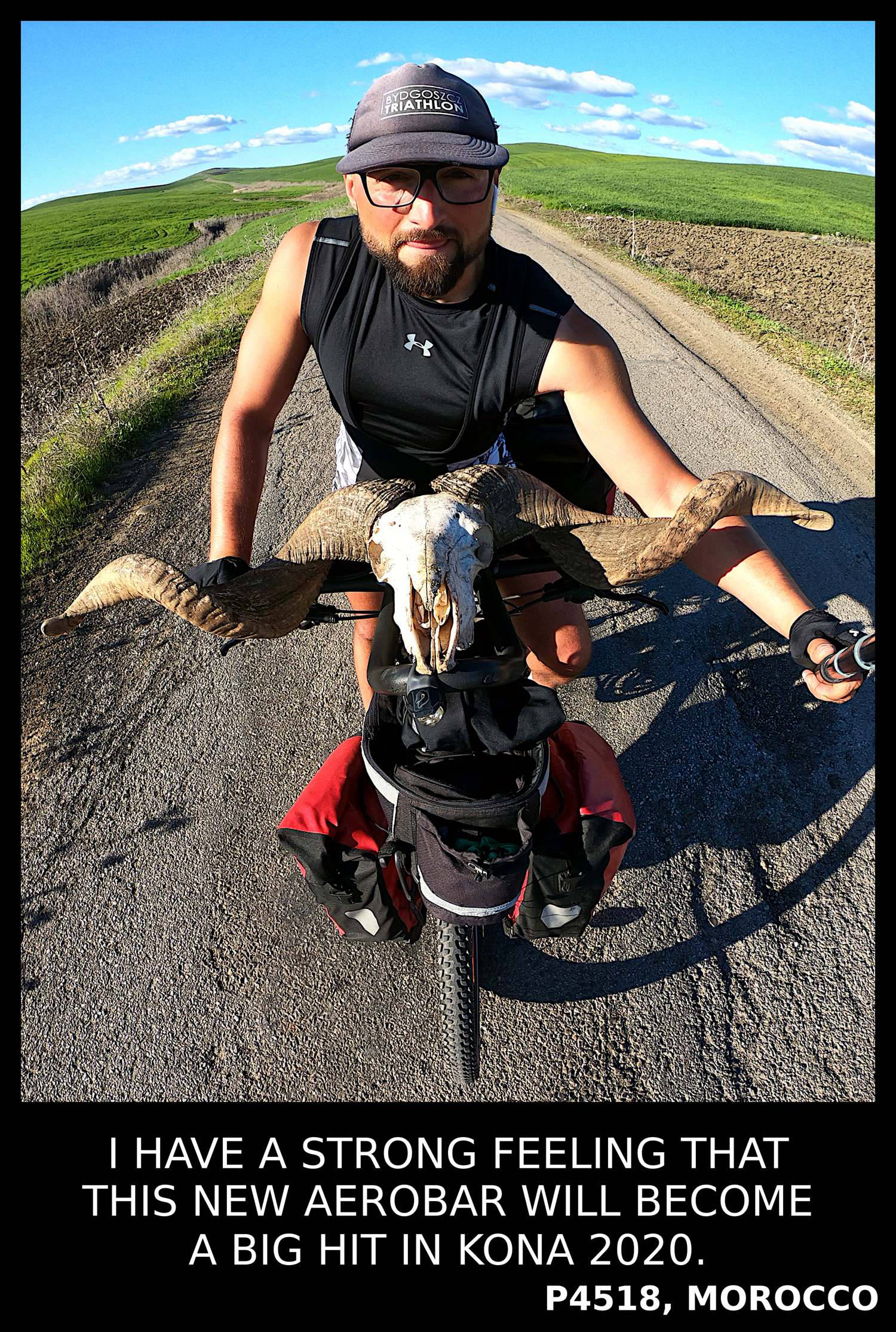 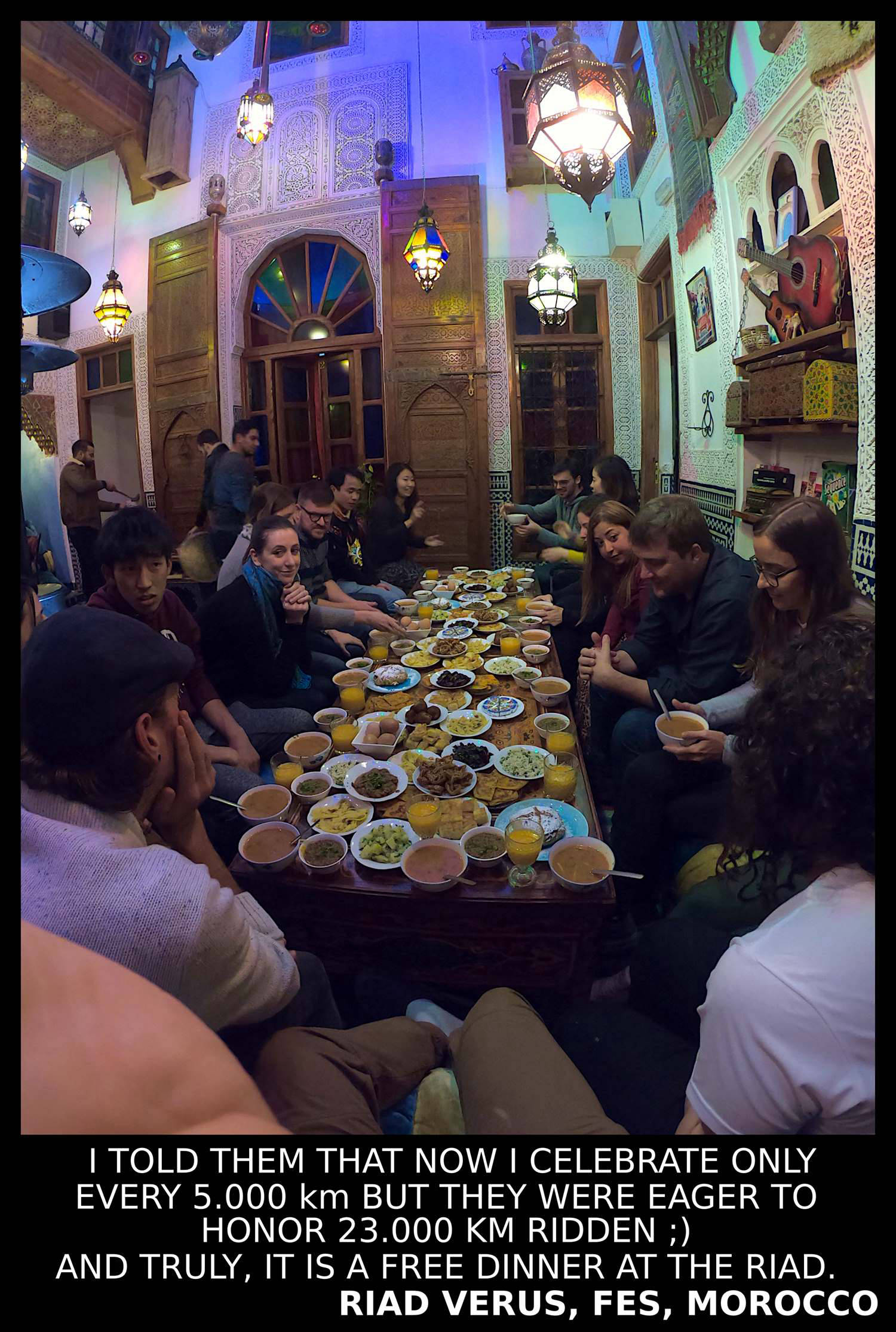 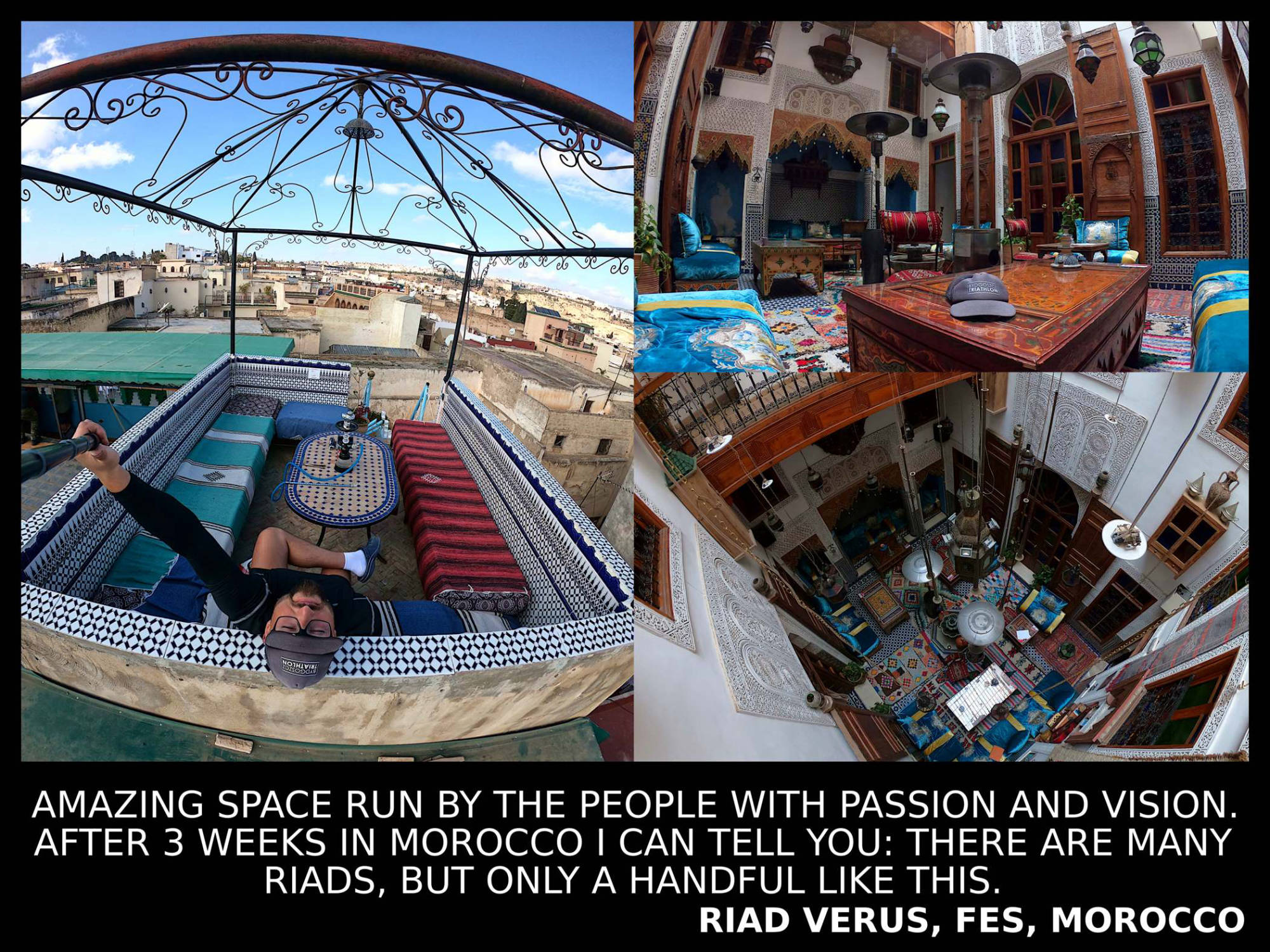 21 days straight with no rain! Not a single drop.

Only a handful with clouds! And even if, then only for a short moment.

I really needed this break after 10 weeks of never-ending rain. And Morocco delivered.

+ Decent quality of roads (a bit better than I expected).

+ A lot of policemen, friendly to the cyclists.

+ Tasty and cheap meals. But raw products rather average.

+ French is common all over the country, Spanish is well known in the north. Sign language perfectly understandable everywhere :)

- Drivers that have no respect for the human life. Especially truck drivers behave like total morons. It reminds me of Turkey.

- Cities: overcrowded, polluted, hard to cycle, can be dangerous at night.

- Scammers trying to abuse the hospitality reputation. No labels in the shops so the price is always up to the seller.

- Old cars and scooters. You can feel it in your lungs when cycling through the city or the main road.

- Obsession with video recording devices. We were questioned about possessing the drone or about the type of video recorder we had. We were also asked not to take any photos of the policemen. We tried not to take out the cameras near major facilities to avoid unnecessary investigation.

- Personally, I don't like "medinas", they are absolutely the opposite of what travelling on a bike is for me: overcrowded, narrow, they take away your feeling of freedom and are the perfect spots for criminals.

- Free potable water is rare. By "free" I mean public places like water fountains. You can always ask people for water, but I'm not a fan of asking.

- Garbage, trash, rubbish. litter problem. However you name it, they have it in Morocco. Wild landfills just outside the limit of the property, burning trash, municipal landfills not protected against the elements. I saw a huge pile of trash blown away by the wind. The garbage, and the smell were distributed evenly among a cuople of nearby villages. You think somebody cared?

- Pollution. For example, when approaching Fes from the mountains, I saw a big part of the sky covered by the black smoke. I thought that such cancerous smoke can be created only by a wildfire, but I learned it is just a factory (doing it everyday). I asked the local guy, if the people are not protesting. He answered that even if the wind is blowing in the direction of the city, they don't see the smoke. When you don't see the problem, it disappears. It was then, when I realised that there is no point of arguing, but I started to look differently at the veggies and fruits labeled "local" and "bio" at the same time.

- 95% of the people are satisfied with mediocrity.

There is a water leaking in the bathroom? - So what?

There is no ventilation, even the water stays on the walls? You enter the room in dry clothes and leave wet? - And?

Sometimes I met people with vision and attention to the details (more info below) so it is possible. A little effort can go a long way.

I don't think I've done it before, but I need to recommend one place. It is RIAD VERUS in FES run by a group of young ambitious people with great ideas. Their main goal is to make your stay unforgettable and make you want to come back (many guests do so, even during the same trip). They go a long way to come together with the guest and create an atmosphere of a family meeting. When I was there, they prepared the free dinner for all the guests. There was so much food, that 1/3 of it was still left. Breakfast (included in the price) is also different than usual. Every portion hand made and delicious. A big portion of socializing every evening and now they are building a heated rooftop terrace for the guests to chill under the stars even during the winter. There are plans for the lounge bar and free drinks in the future. As one of the owners said something like this:

"We prefer to earn less, but make you want to come back and honestly recommend this place."

And they are on the right way to achieve their goal. A shining pearl among the mud of mediocrity.