amp templates
Back on my planned route, but am I prepared? Do I know anything about Greece? It turns out, that nothing at all. But I like surprises.

WHAT IS REALLY OUT THERE? 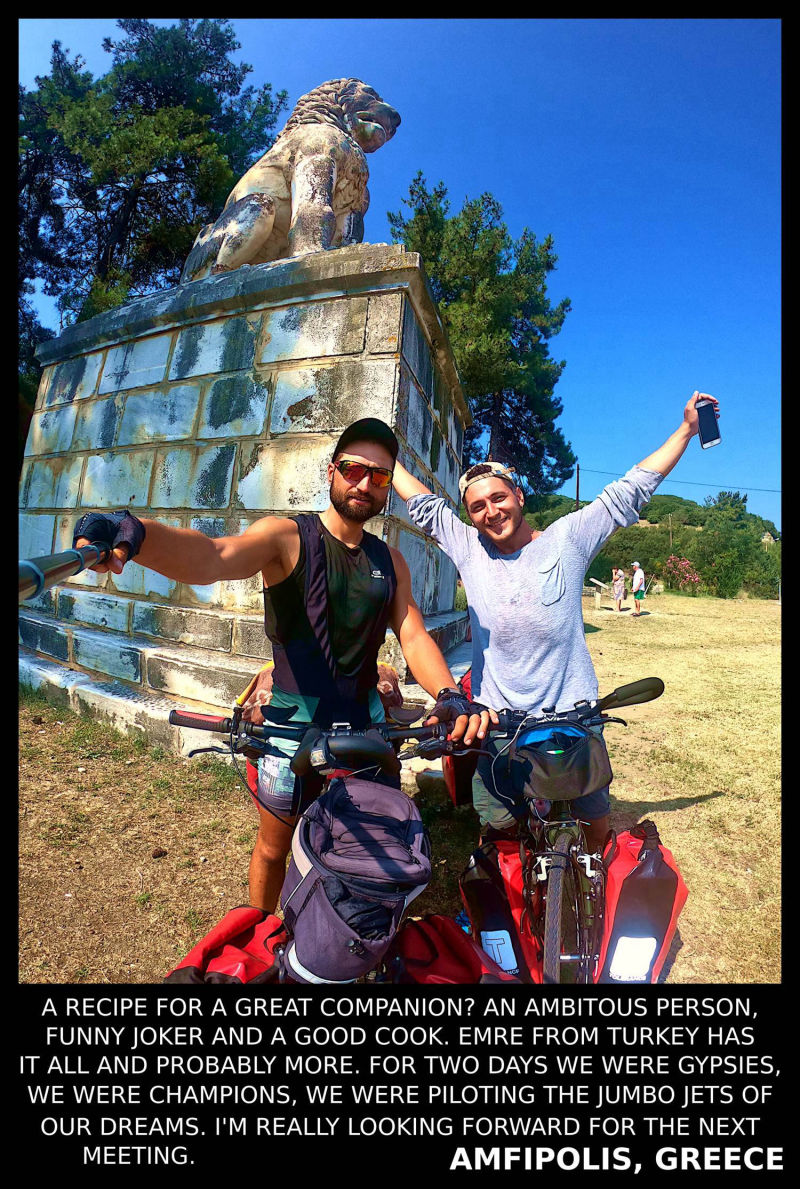 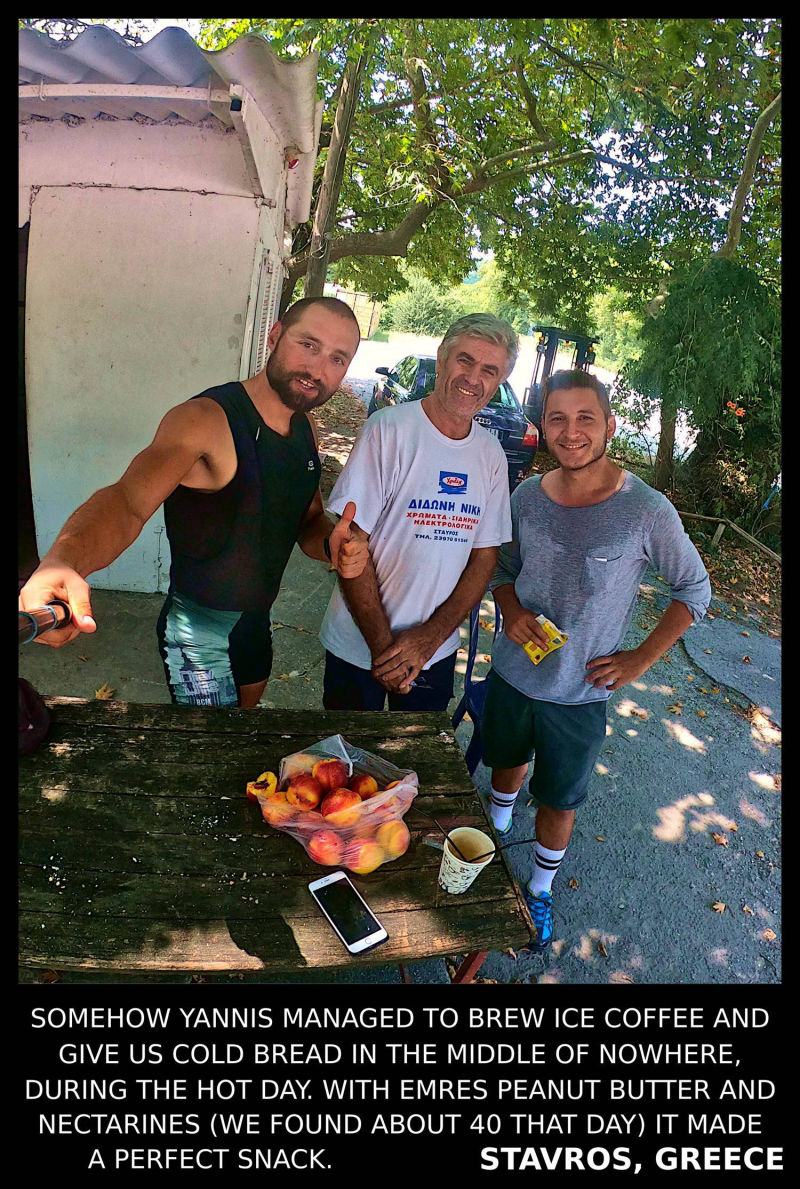 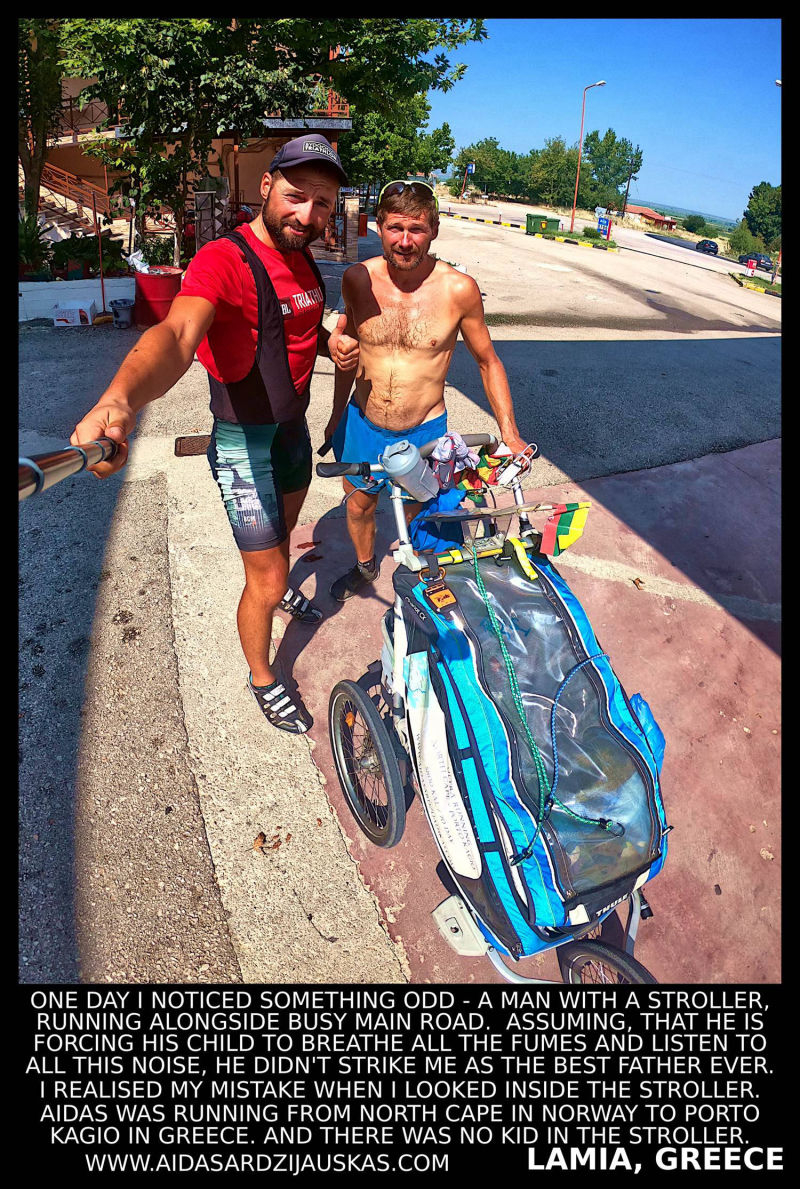 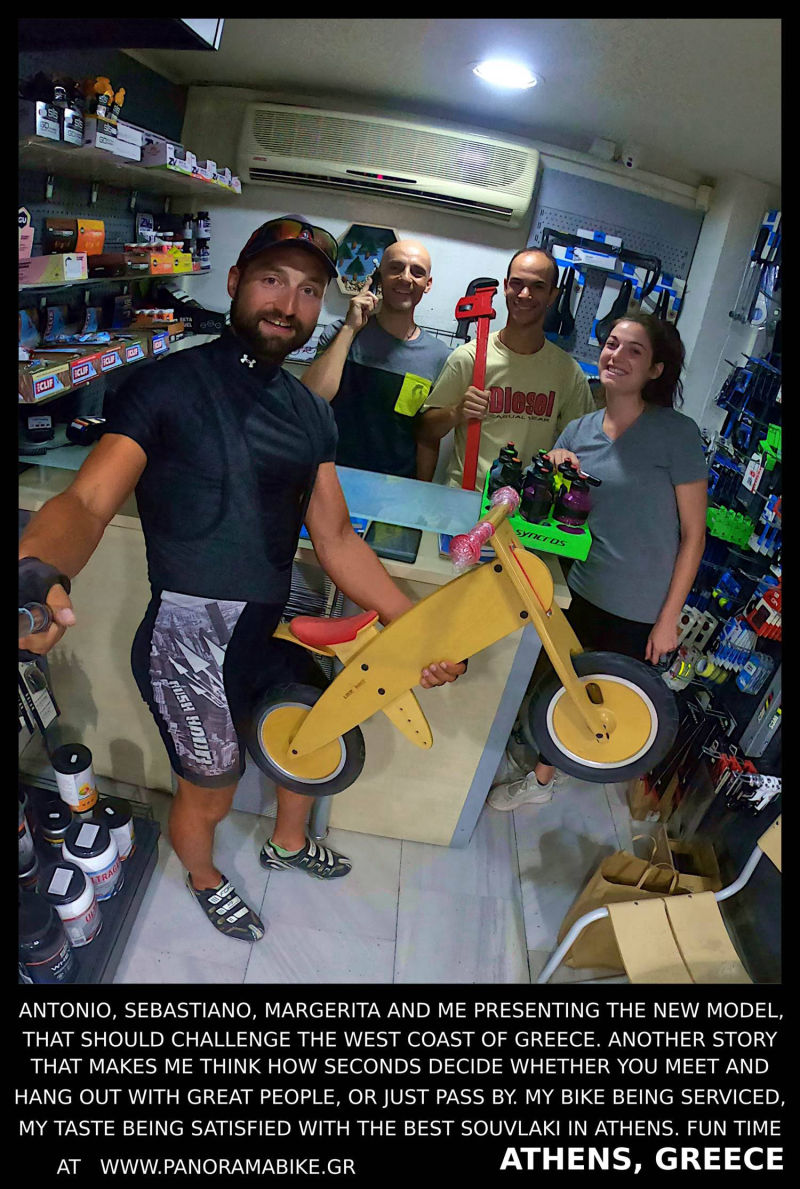 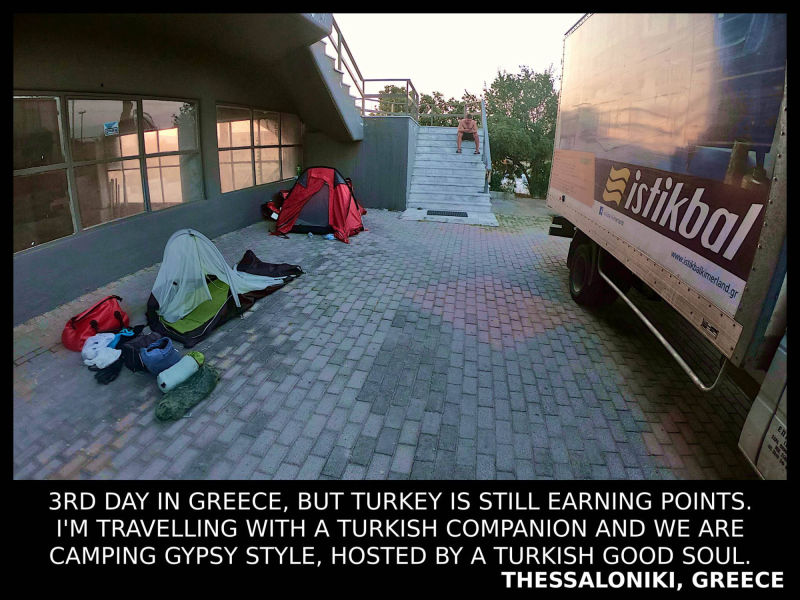 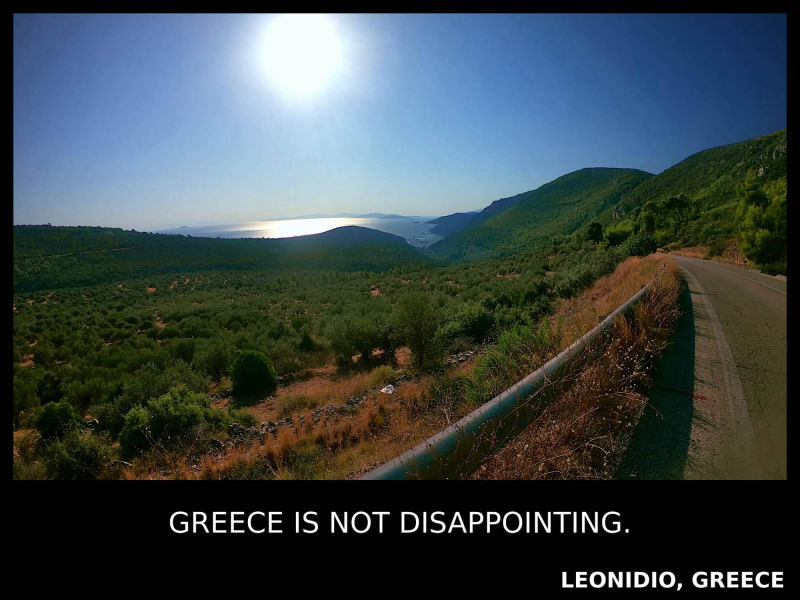 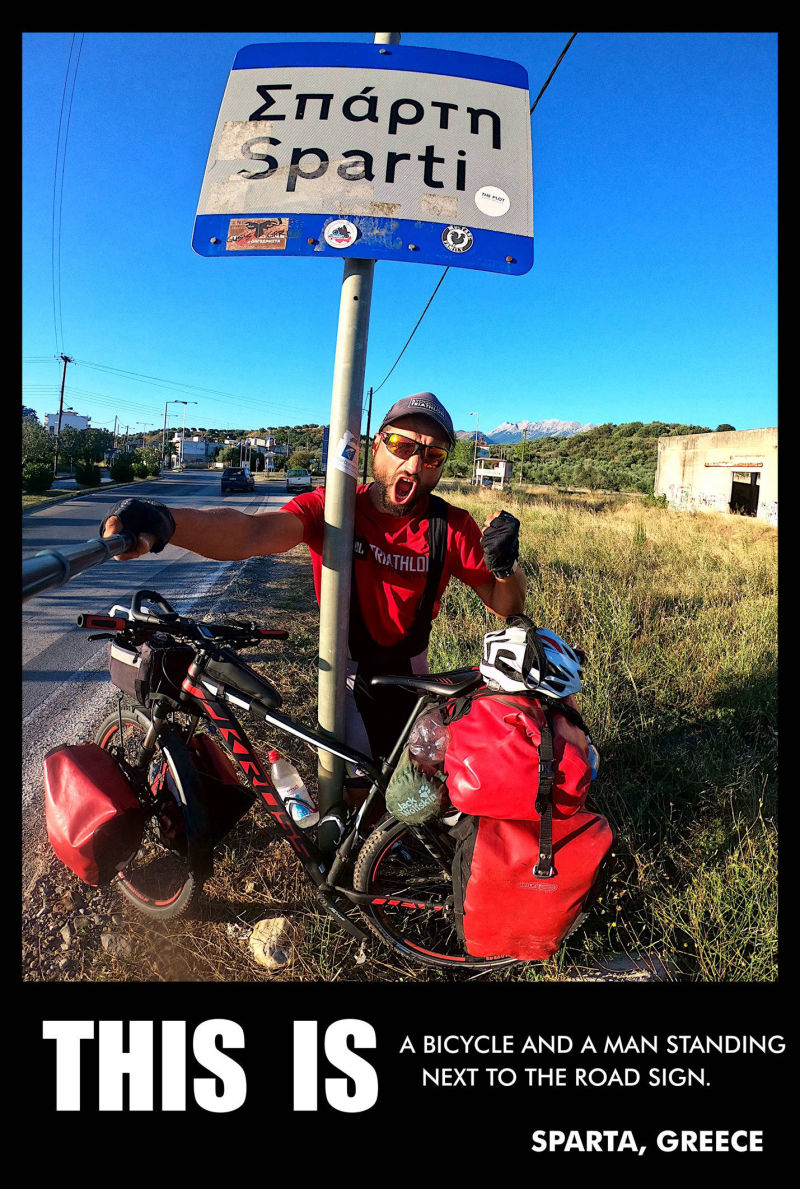 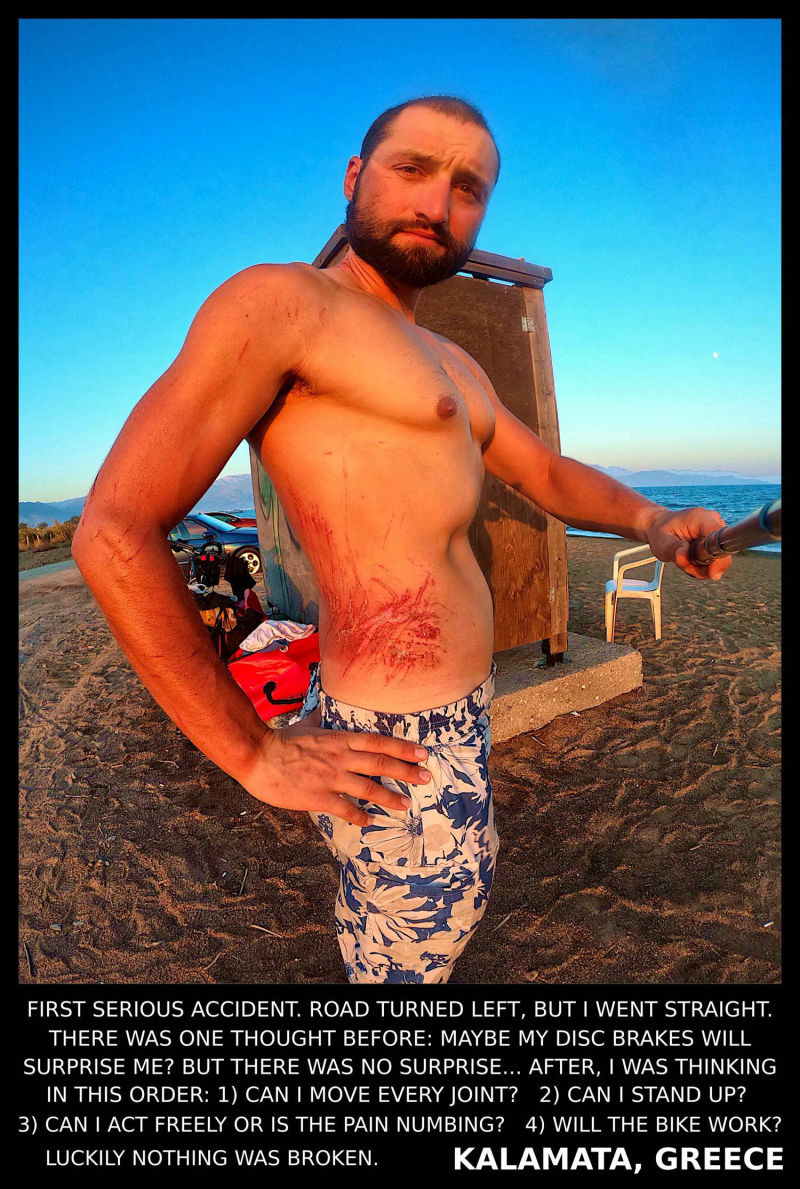 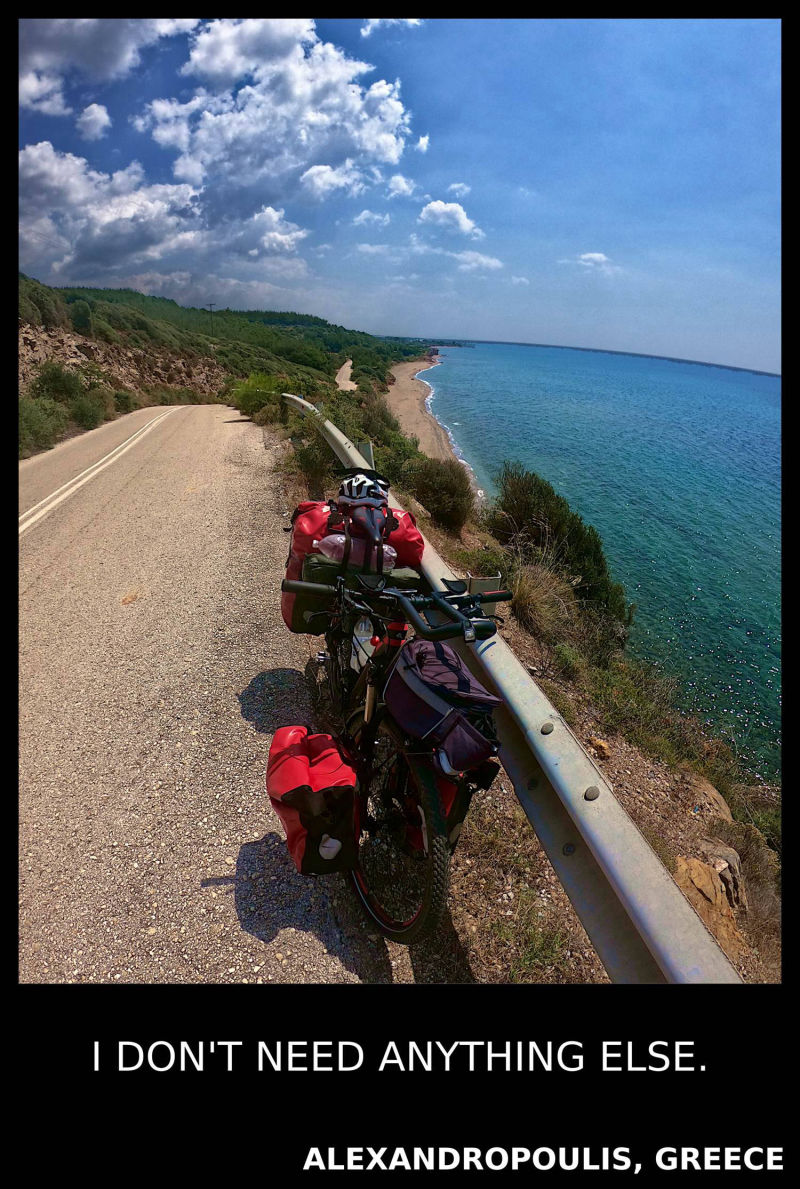 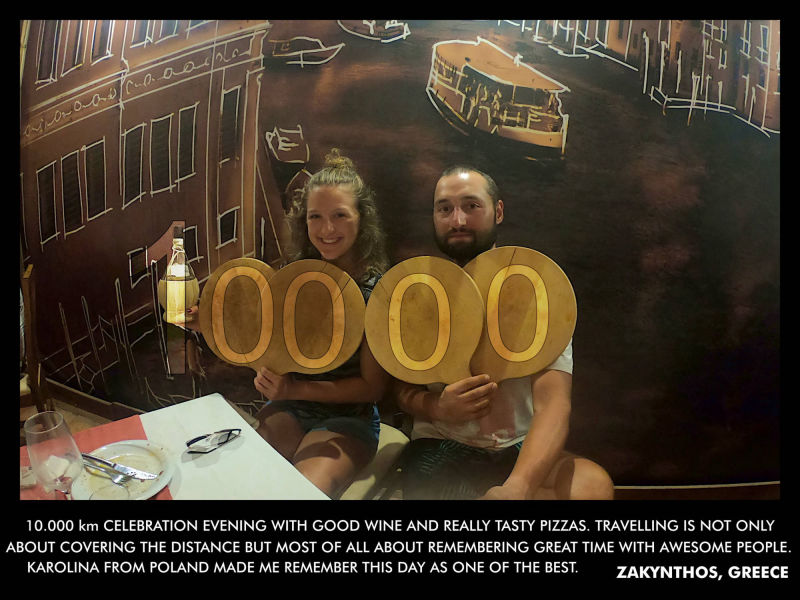 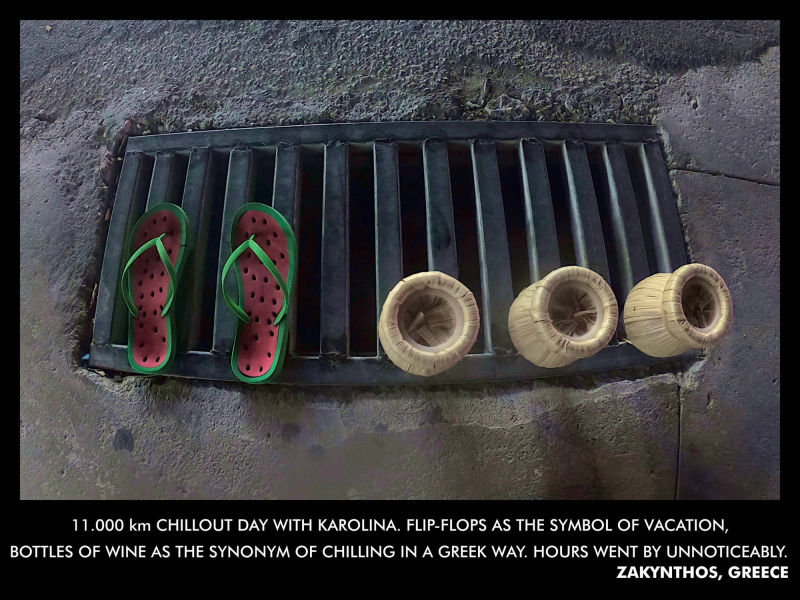 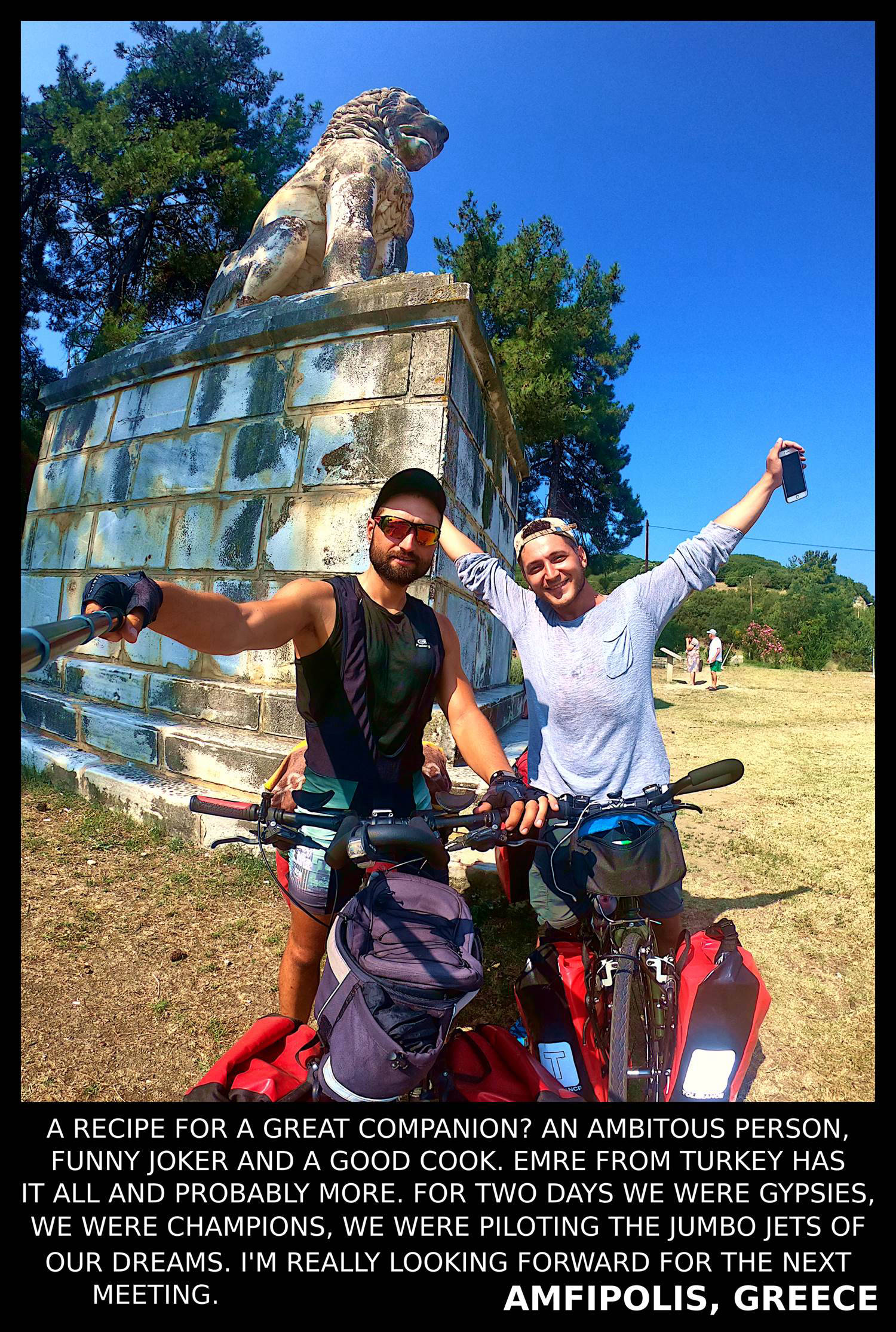 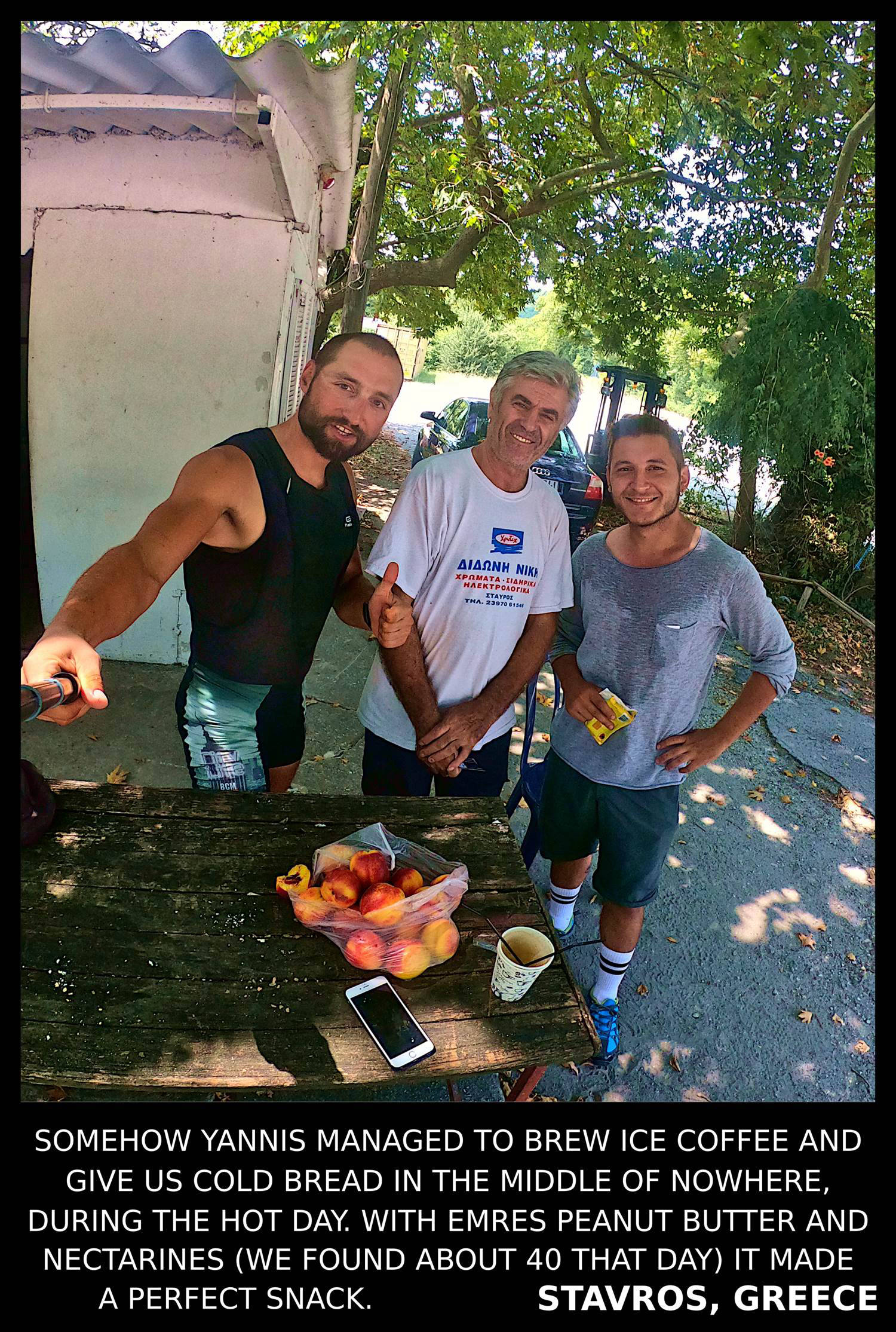 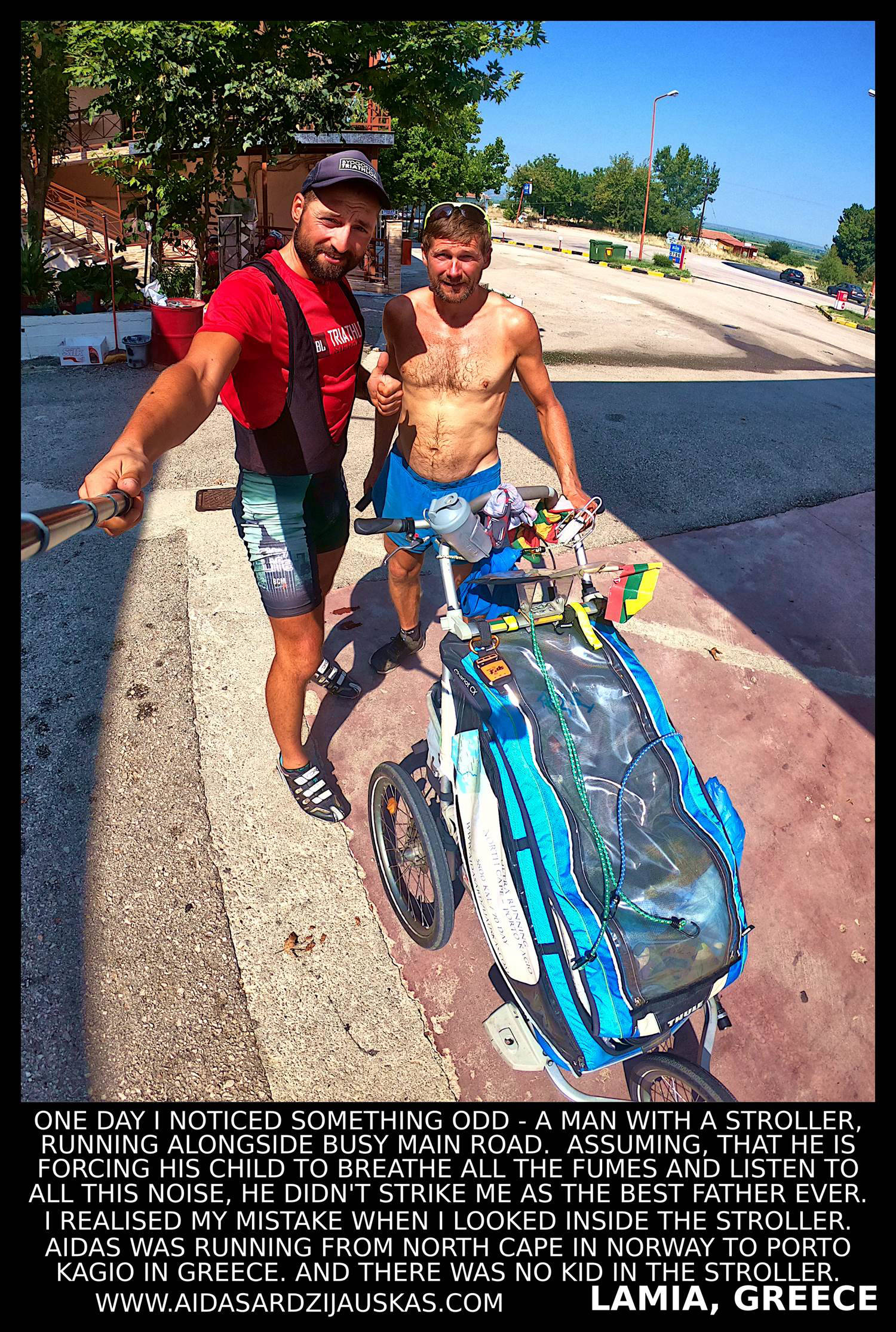 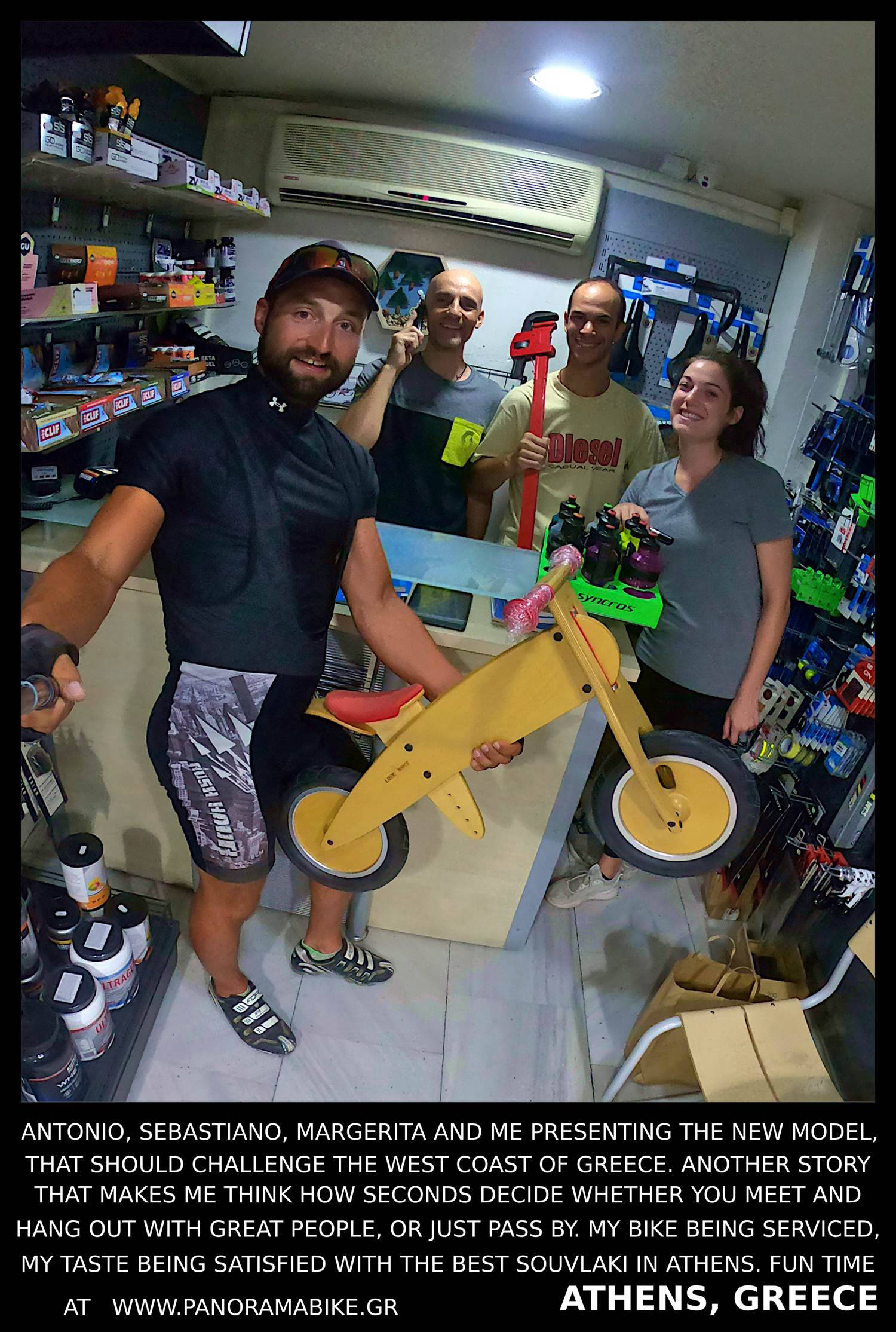 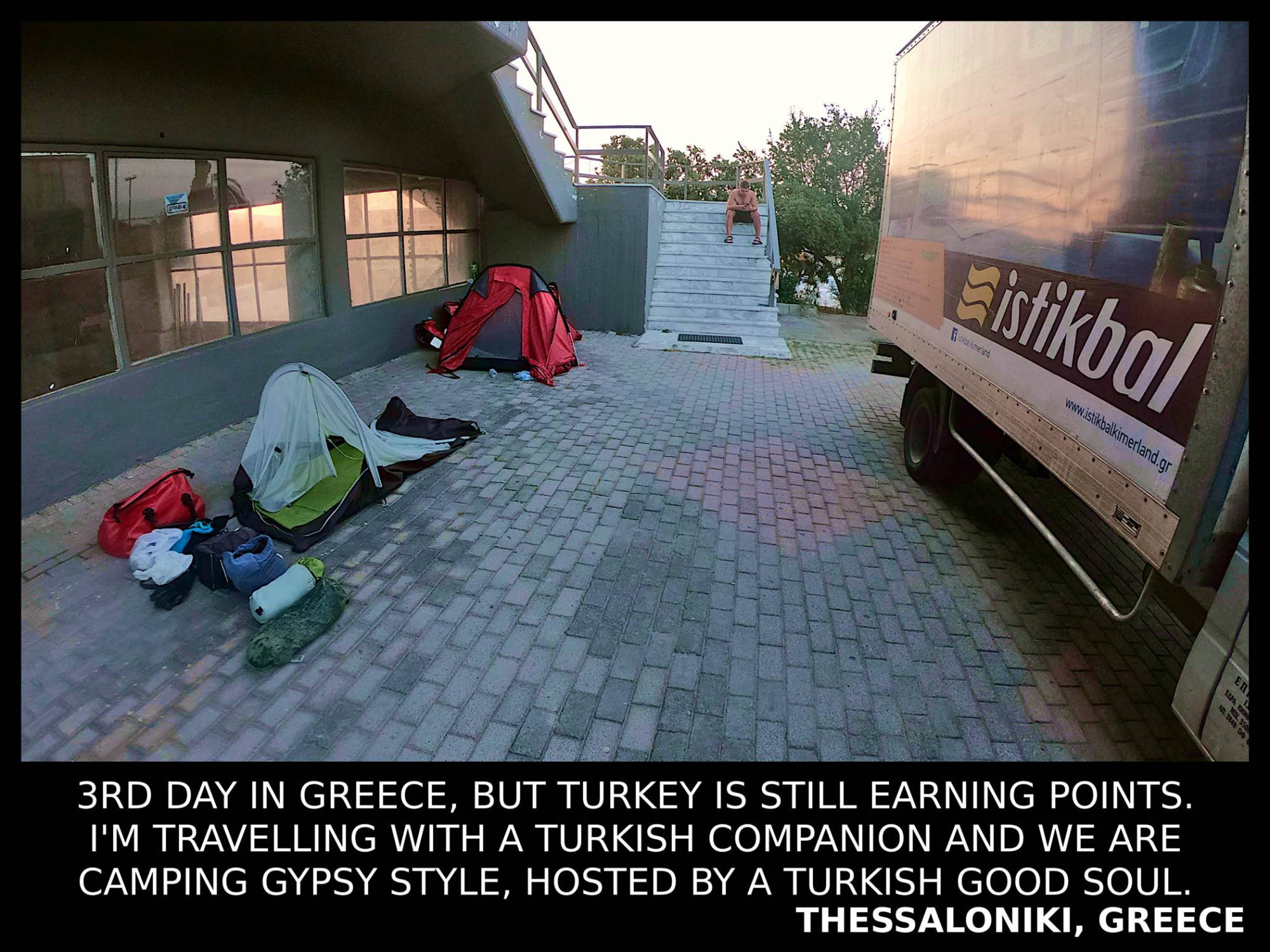 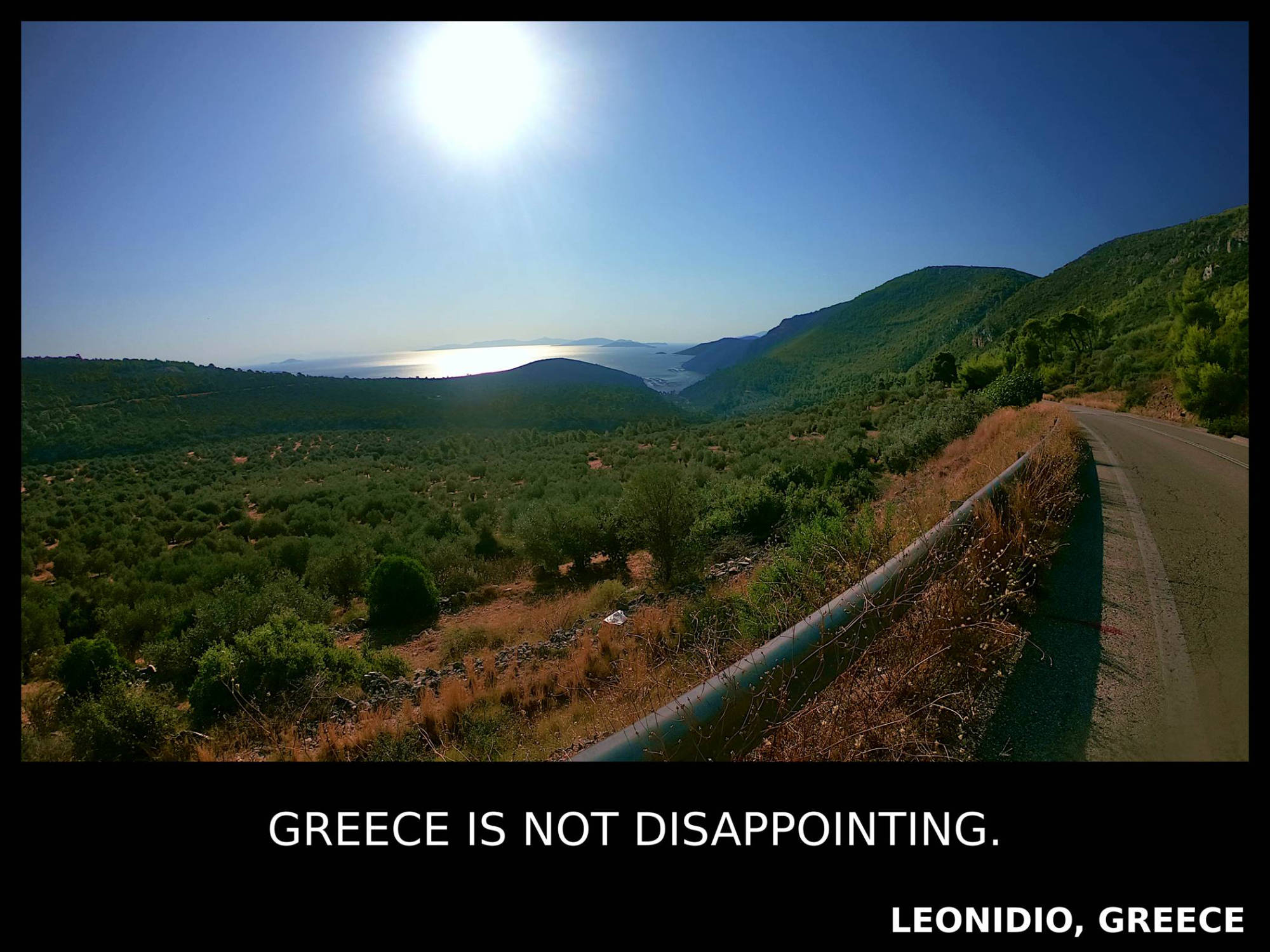 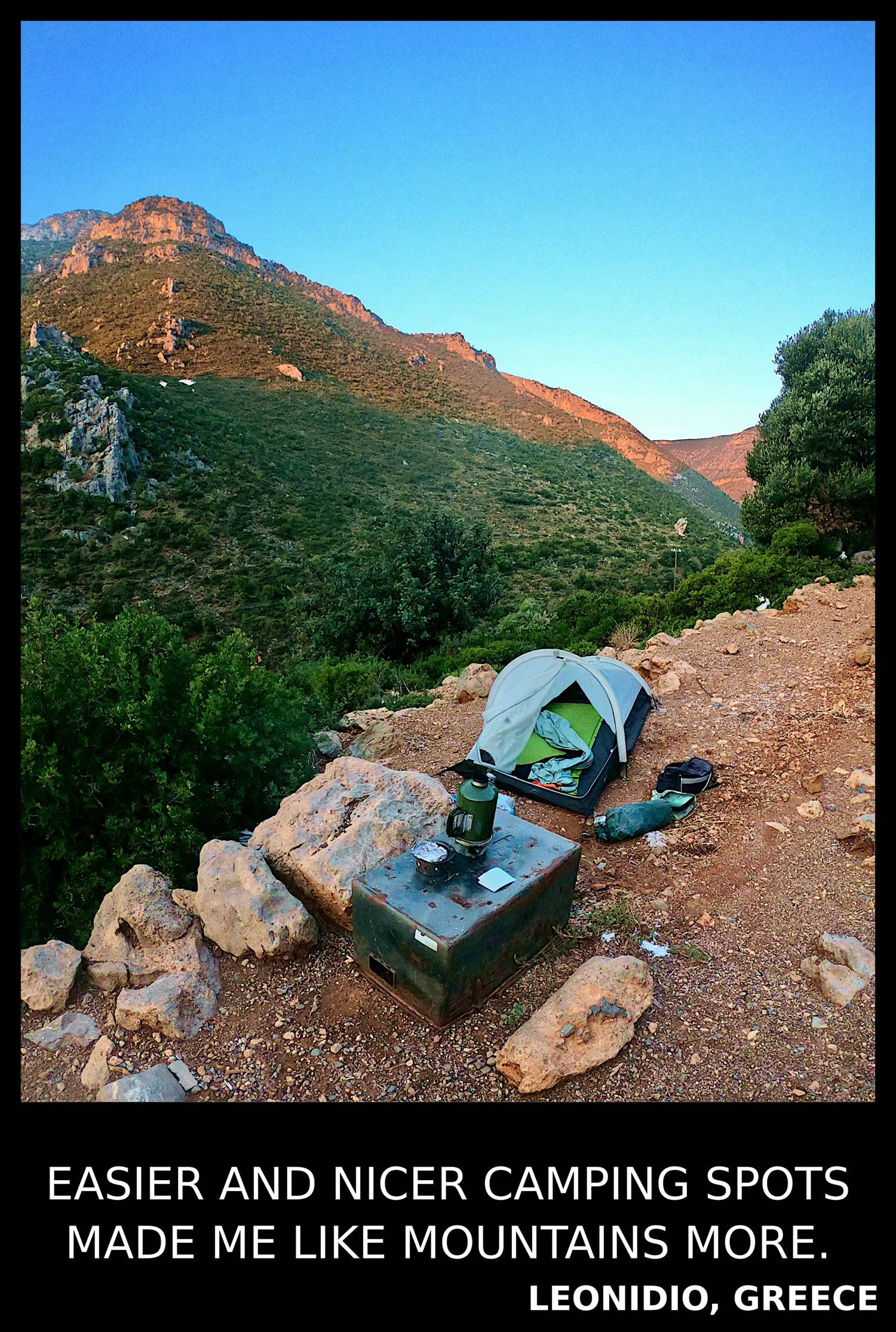 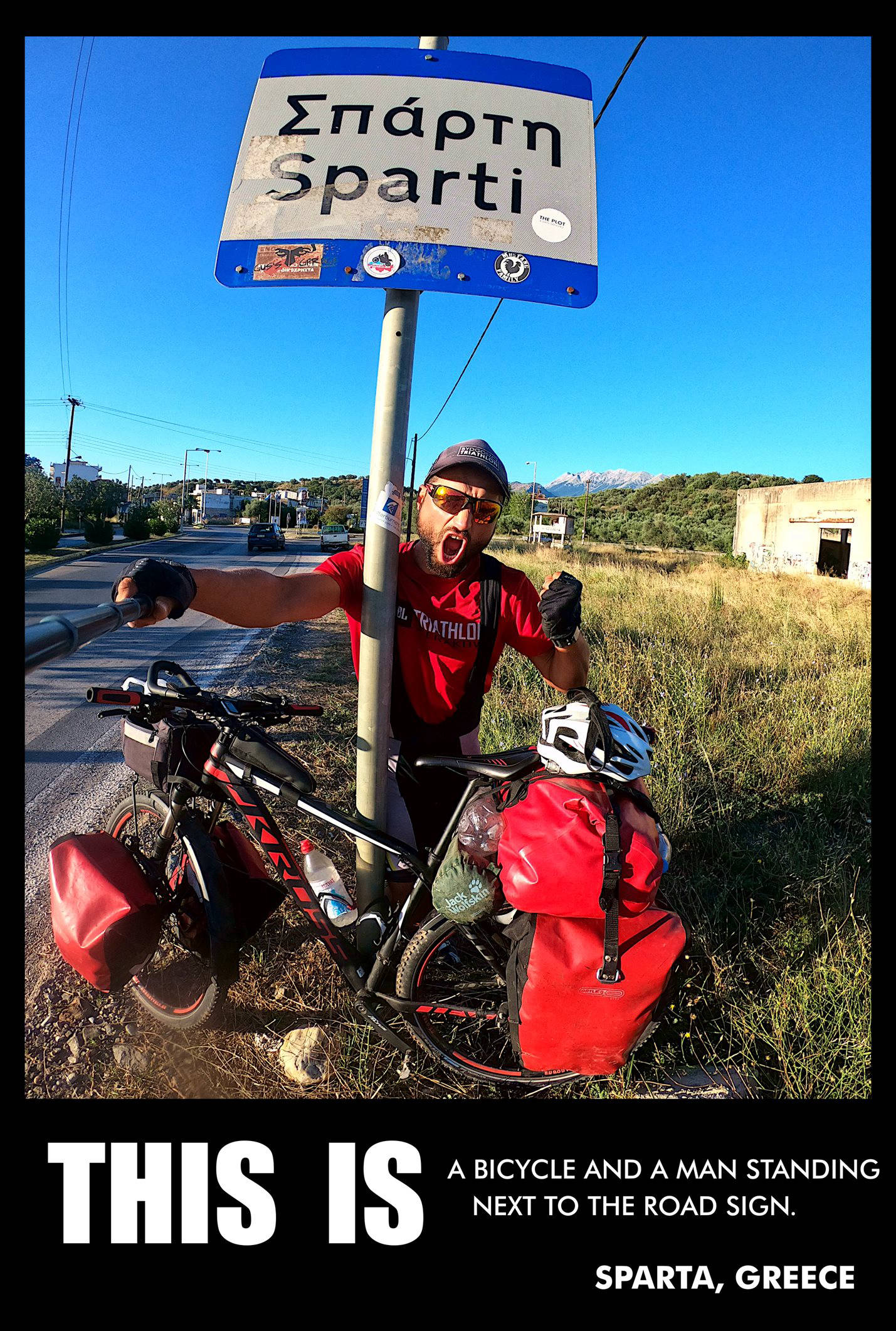 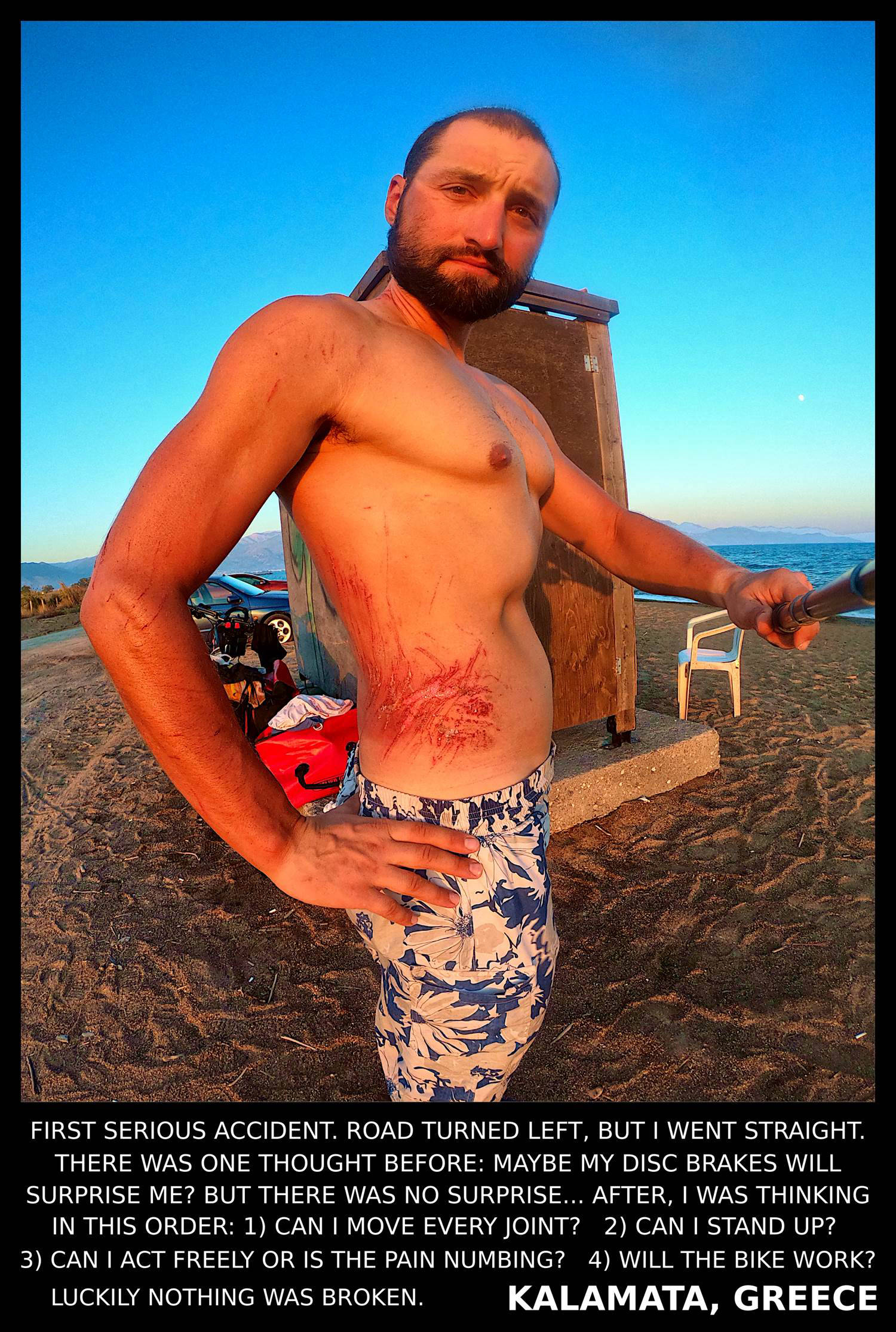 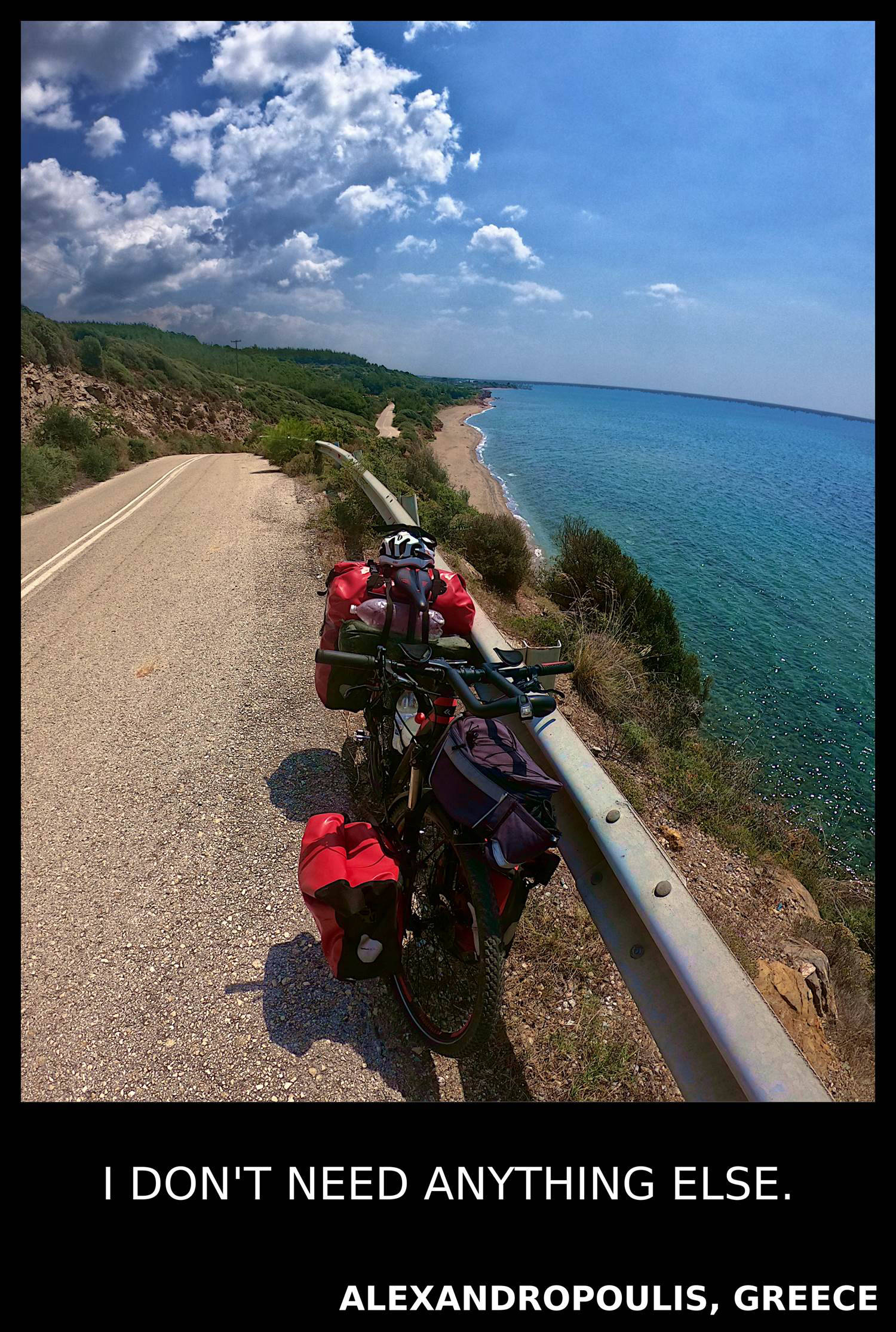 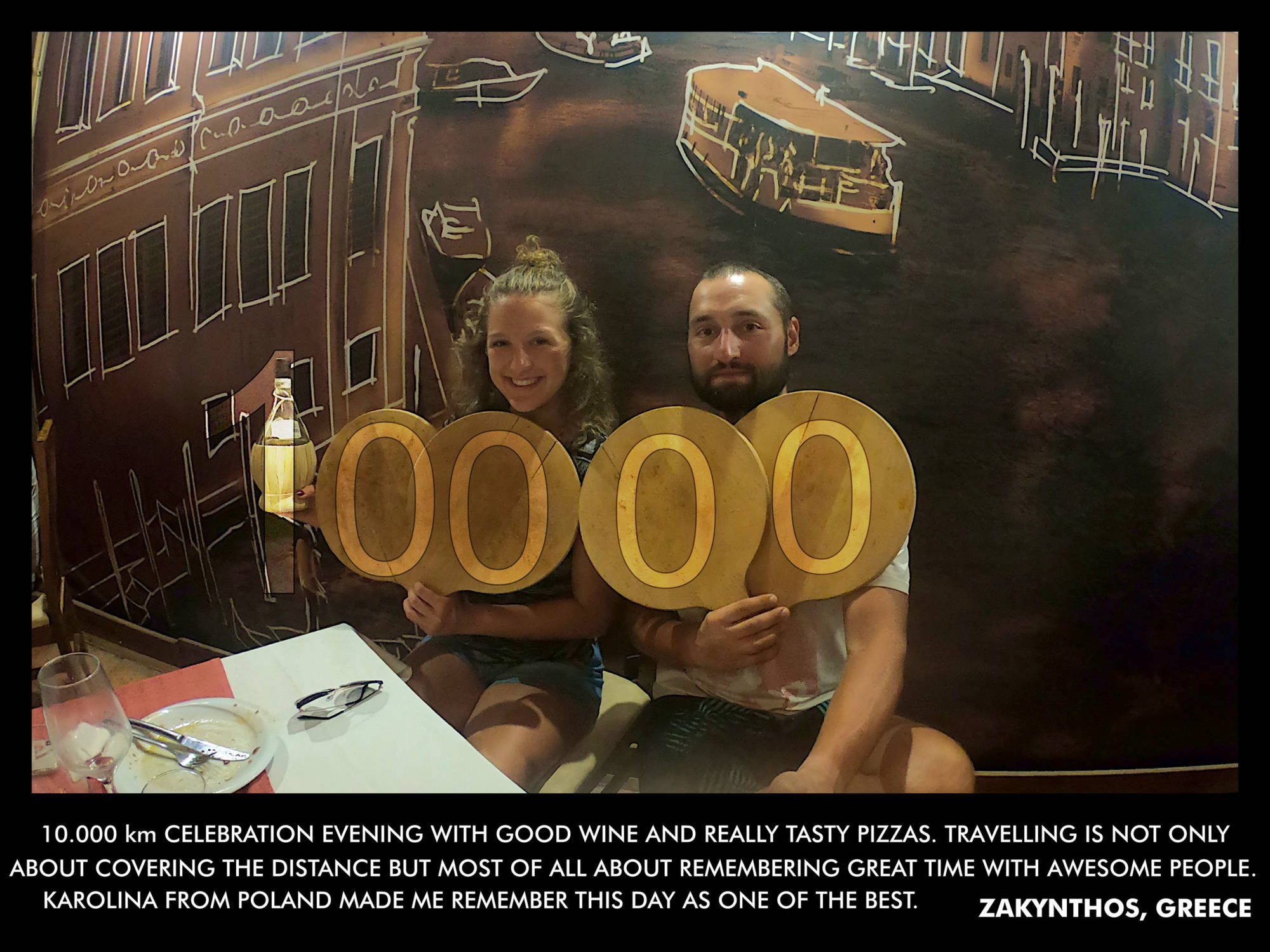 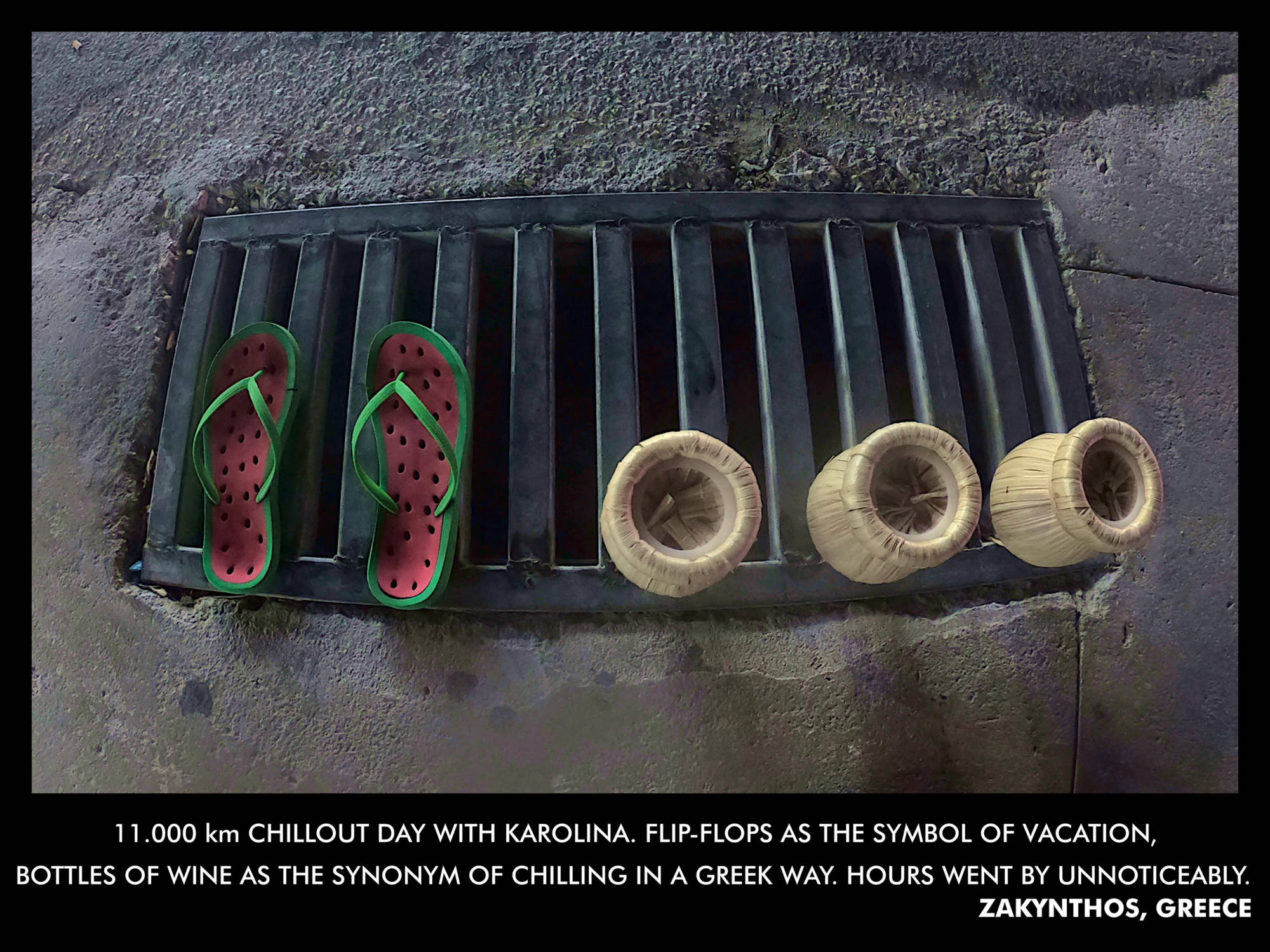 What have I noticed about Greece?

Well, it is expensive, more than I thought. Twice the price from Turkey, bread not like Ekmek, milk "distilled" in smell and taste.

It is hilly, more than I thought. Both Greece and Turkey together made me like going uphill, more than I thought. It is a different quality of work, you can't do as many kilometres, but they are more satisfying and it is easier to camp in the mountains than on the plains where every square meter is already occupied.

I can read more letters than I thought. I was too lazy to check the alphabet before I started the trip, but realised that most of the letters are used in math, physics and engineering equations. So, for example, you have a wavelength described by lambda and you can now read "L", diameter described by fi, and you can read this letter. This goes on and on, almost the whole alphabet is already used.

People speak and understand Turkish freely, more than I thought, Later Emre explained me why and it makes sense.

Drivers are polite, more than I thought. Honking is rare, they slow down before overtaking the cyclist. They do not fit into my imagined southern driver model.

Little mountain villages are pretilly located, exactly as I thought. You won't get me on this one, ha!

Greece, a country of companions, although many of them were not Greeks.

The guy I like from the very beginning. Ok, let's say, from the second time we've met. First moment was a miss, he didn't know that I hate whistling almost as much as honking and I ignore every such sound. But he didn't give up, caught me and that is how our two days journey began. I like the company of people like me, I search for them and can easily recognize such person. And those two days felt like two weeks, in a positive way, of course. I asked Emre all the questions I had about Turkey and after 22 days I came up with quite a few. He taught me more than I could learn on the internet and already, after 3 days, I started to miss this country, Next time I will try all the omitted things and start a crusade to find never existed "sut misiri" :)

On the other hand, Emre discovered his true possibilities. I should rather say, he learned that his limits were only imagined by himself. Together we had a great time. After Thessaloniki we separated with a strong decision to meet again along the way. I really wanted to use the opportunity and cycle through south of Greece and it was a great decision (more about it in number "3").

Emre, if you are reading this, write me an e-mail. Wish you good luck with realizing all your dreams, those close in time and lifelong (you know what).

By pure chance, quantum fluctuation, I decided to rest for a bit longer in a specific place before Athens. Out of many people passing by, one approached me. Adding one and two, we decided to meet again the next day. I'm not a fan of large settlements. In my opinion, big city is only a big problem for a cyclist, but they made Athens a bit more "digestible".

That makes me think how many such opportunities, decided in a split of a second, did I miss? You can never know where you find good people until you meet them. Guys, thanks for all the help with the bike, good hints about Athens, best Souvlaki and good time.

Do I have to go 11,000 km to spend the perfect chillout day? Is it about the spot? Weather, landscape, local cuisine? Not really, because only good companion makes them mean something and polish girls are the best, "do tanca i do rozanca", as we use to say.

It was just one day, not even 12 hours, but again, felt like weeks. We had just enough time to do everything lazy, completely chilled, not to haste any action and to talk about everything we wanted. On the other hand, it was so little, that we were left with a hunger for more. Next day Karolina was working again and I was back on the road, but each of us took the memory of that bubble, where we were completely out of time and space.

And I can't believe how lucky we were with the background. On an island where generally quantity prevails over quality, we found a place with awesome food, wine and music that complemented all of this without getting in the way (although they need to work on making the playlist longer).

From the beginning I was wondering about the chillout day, but no opportunity seemed good enough. That day was better than my expectations and boosted the morale for a long time. Good luck to you my friend, I will make sure you will keep your promise about Poznan.

First, I need to describe the scene, because it's important for the story. When I camp wild (80% of the time) I try to be well hidden. If nobody sees me, no one will bother me during the night, attack me or call the cops or whatever. When I want to cook or just boil water for the tea, I wait for the dusk, so that smoke won't sell out my hideout. I don't make a fire, I have a special kettle where all the magic is happening inside, so basically every night looks like this: pitch black everywhere around me, only tiny beam of light from the pot in the place of an air intake. Me sitting on the ground next to the kettle with all the needed stuff (containers and food) around me, within reach of hand. I don't need any other light because I already know what to do and where everything is.

That night was like every other night. All the food and tea for the next morning was prepared. I was seating near the kettle and finishing my dinner. Complete darkness around me and small beam of light from the hole in the pot. Suddenly, I noticed a movement close to me, a darker shadow moving over the lighter shadow on the ground (could be leaves, rats, birds?) But then this animal passed near my right leg, slowly moved towards the warm kettle, laid on the ground next to it and relaxed. I didn't know what to do. Should I pet him?

I'm definitely not doing it, because for a moment I saw it in a beam of light from the kettle. I saw its claws, then six legs (two I missed) and finally a tail with a stinger. It was a scorpion. It was sitting somewhere between my legs, in the dark, I only saw the shape of a tail, risen up. So, If petting is not an option, maybe killing it would be safer? And what if one hit with a kettle won't be enough, if I miss and it will sting me in self defense? And the more important question: how many of these beggars are around me right now? How many nights when I was reaching for a container, my hand was passing near such or worse creatures and I haven't even noticed? If he stings me, how much time do I need to pack all the camp, cycle to the nearest village, call for help and wait for the ambulance?

Well, it was not time for that kind of thoughts. I needed light, so I slowly moved my legs away, jumped towards the bike, found my headlight and lighten it but the scorpion was already gone. Good, it was a win-win situation. He survived another night, I was warned, without severe consequnces. The funny thing is that from day one I was always shaking my shoes before putting my feet inside. I never wanted to discover a spider, snake or scorpion inside any part of my clothing. But I didn't consider it likely.

I think that scorpion felt the heat from the pot and wanted to raise its body temperature before hunting (it was about an hour after sunset) but why didn't it hesitate to approach a human being? It was also quite big (half of my hand) and the bigger the scorpion, the less poisonous its venom should be. I think my life was not in danger, but definitely I risked a lot of pain and maybe a long break because of a health condition.

The other idea that comes to my mind is that he read the website and wanted to see the bike, who knows?